You probably know this guy from the movies “Half Baked” or “Block Party” and from his hilarious stand-up shows “For What It’s Worth” and “Killing  Them Softly”. I’ve seen almost every joke and every movie he ever produced and acted in. I used to watch him to fulfill my “laughing time” of the day.

He uses lot of forbidden words, but that’s his style and people find it hilarious (including me). Even though his intention is make the people laugh, I have noticed that he also finds a void during his jokes to say amazing and inspiring things.

I have detached 26 interesting and inspirational quotes by Dave Chappelle that always fulfill my inspirational and laughing part of the day. 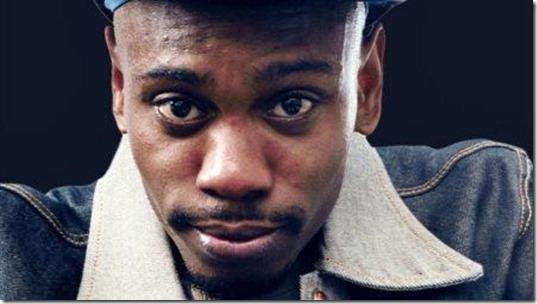 1. My father told me ‘Name your price in the beginning. If it ever gets more expensive than the price you name, get out of there.’

2. I’m cool with failing so long as I know that there are people around me that love me unconditionally.

3. You know you must be doing something right if old people like you.

4. The hardest thing to do is to be true to yourself, especially when everybody is watching.

6. I just always loved stand-up. It’s like magic. You say something, and a whole room full of people laughs together. Say something else, they laugh again. The facts that people come to see that and participate in that… I don’t know, it’s just like magic.

7. People don’t know what it’s like standing up there on stage, when you have a wall of people smiling at you.

8. Because I was surrounded by so much negativity at some point that it took me going back and doing stand-up to realize, you know, people really like me.

9. Fame for me is like a place, a country I’m taking a tour through.

10. Something about New York, man: You can do more comedy there probably than you can anywhere in the world. If you’re interested in being funny, New York is the place to go.

11. If you don’t have the right people around you and you’re moving at a million miles an hour you can lose yourself.

12. The world can’t tell you who you are. You’ve just got to figure out who you are and be there, for better or worse.

14. Stand-up is the kind of gig that’ll show you where you’re at.

16. Whether it means having a show, or a movie, or just being on a stage, I need an avenue to say what I have to say.

17. I felt in a lot of instances I was deliberately being put through stress because when you’re a guy who generates money, people have a vested interested in controlling you.

20. My wife asked me once if I weren’t a comedian what I would do. I couldn’t answer the question. I never imagined doing anything else. (He found his passion)

22. When I’m on stage, I get real happy there. Maybe that’s the only time in my adult life I feel like myself.

23. One of the things that happen when people make the leap from a certain amount of money to tens of millions of dollars is that the people around you dramatically change.

24. There are a lot of people who don’t want anything from me but to laugh and have a good time. You see them at the show and they like – they dress up to come see your show and stuff. And they pack these auditoriums and it’s a lot of fun, man. It’s like, this is how I started, and it’s still fun for me.

25. Most of the people around me have a vested interest in how much money I make. You know, so a celebrity could find themselves in a position where people could have meetings about their life without them involved. And when I say ‘their life’ I mean not their professional life either. They could talk about their personal life.

26. You got to be careful of the company you keep.

To fulfill your “laughing time” you can visit 19 pictures of hilarious light bulb jokes or let Master Yoda do the inspirational part.