Charles Darwin was a brilliant naturalist who changed the way people think about life on earth. The first reason was because he was always passionate about science and nature.

He was a British scientist who laid the foundations of the theory of evolution and transformed the way we think about the natural world.

Born on 12 February 1809 in Shrewsbury, Shropshire Charles Robert Darwin grew up in a wealthy and well-connected family.

Darwin himself initially planned to follow a medical career, and studied at Edinburgh University but later switched to divinity at Cambridge. In 1831, he joined a five year scientific expedition on the survey ship HMS Beagle.

At this time, most Europeans believed that the world was created by God in seven days as described in the bible. On the voyage, Darwin read Lyell’s ‘Principles of Geology’ which suggested that the fossils found in rocks were actually evidence of animals that had lived many thousands or millions of years ago.

Lyell’s argument was reinforced in Darwin’s own mind by the rich variety of animal life and the geological features he saw during his voyage. The breakthrough in his ideas came in the Galapagos Islands, 500 miles west of South America. Darwin noticed that each island supported its own form of finch which were closely related but differed in important ways.

However controversial Darwin discoveries are, his words are indeed useful, full of knowledge, and inspiring.

Here are 25 inspiring quotes from Charles Darwin on life that we can use in any second of ours. 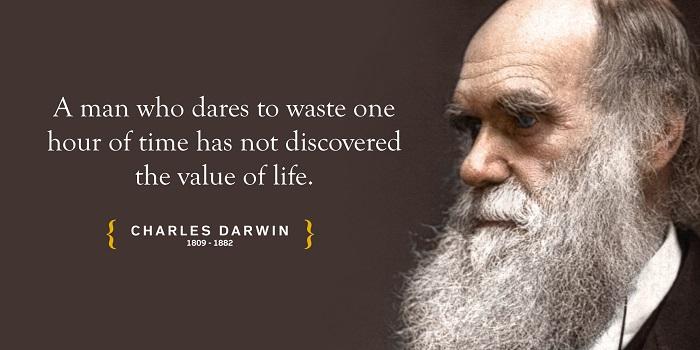 1. “If I had my life to live over again, I would have made a rule to read some poetry and listen to some music at least once every week.”

2. “A man who dares to waste one hour of time has not discovered the value of life.”

3. “It is not the strongest or the most intelligent who will survive but those who can best manage change.”

4. “Ignorance more frequently begets confidence than does knowledge: it is those who know little, not those who know much, who so positively assert that this or that problem will never be solved by science.”

5. “Thus, from the war of nature, from famine and death, the most exalted object which we are capable of conceiving, namely, the production of the higher animals, directly follows. There is grandeur in this view of life, with its several powers, having been originally breathed into a few forms or into one; and that, whilst this planet has gone cycling on according to the fixed law of gravity, from so simple a beginning endless forms most beautiful and most wonderful have been, and are being, evolved.”

6. “The love for all living creatures is the noblest attribute of man.”

7. “I am not apt to follow blindly the lead of other men”

8. “The highest possible stage in moral culture is when we recognize that we ought to control our thoughts.”

9. “An American monkey, after getting drunk on brandy, would never touch it again, and thus is much wiser than most men.”

10. “We must, however, acknowledge, as it seems to me, that man with all his noble qualities… still bears in his bodily frame the indelible stamp of his lowly origin.”

11. “Blushing is the most peculiar and most human of all expressions.”

12.“Besides love and sympathy, animals exhibit other qualities connected with the social instincts which in us would be called moral.”

13. “Intelligence is based on how efficient a species became at doing the things they need to survive.”

14. “One general law, leading to the advancement of all organic beings, namely, multiply, vary, let the strongest live and the weakest die.”

15. “Nothing is easier than to admit in words the truth of the universal struggle for life, or more difficult–at least I have found it so–than constantly to bear this conclusion in mind.”

16. “Great is the power of steady misrepresentation”

17. “I see no good reasons why the views given in this volume should shock the religious views of anyone.” – The Origin of Species

18.“We are not here concerned with hopes or fears, only with truth as far as our reason permits us to discover it.”

19. “Often a cold shudder has run through me, and I have asked myself whether I may have not devoted myself to a fantasy.”

20.“The loss of these tastes [for poetry and music] is a loss of happiness, and may possibly be injurious to the intellect, and more probably to the moral character, by enfeebling the emotional part of our nature.”

21. “Nevertheless so profound is our ignorance, and so high our presumption, that we marvel when we hear of the extinction of an organic being; and as we do not see the cause, we invoke cataclysms to desolate the world, or invent laws on the duration of the forms of life!”

22.“We are always slow in admitting any great change of which we do not see the intermediate steps.”

23.“A fair result can be obtained only by fully stating and balancing the facts and arguments on both sides of each question.”

24. “To kill an error is as good a service as, and sometimes even better than, the establishing of a new truth or fact.”

25.“Only picture to yourself a nice soft wife on a sofa with good fire, & books & music.”

For more inspiring quotes you can visit our article on Maya Angelou, Socrates, and Henry Ford.