I’ve never actually threw boomerang and managed to bring that thing back! But I’ve seen clips on YouTube that people do it, but it has some kind of throwing tactic. However, we are not here to discuss the boomerang, although it’s a good life metaphor.

As boomerang works, echo has the same kind of function. As loud you yell, as lounger the voice will come straight to your ears. It’s disturbing fact that we have to yell aloud to get louder results.

Life is always fair instead of lucky. Before, I was personally the one that believed life was happening to people, instead of believing that life is what we create as individuals. It always has to start inside you.

While the most successful individuals, like the ones on this list were enormously successful because of the companies they formed with thousands of people, it all started as an idea from each and every one of them followed with action and execution.

It doesn’t need to be money to make you happy, but the results from chasing your visions. The next quotes that look like metaphorical boomerang, will witness that your life is an echo. 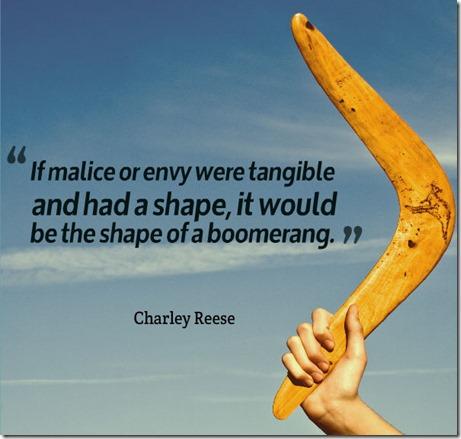 As a boomerang, the force we use to throw things in life will come when we least expect it. Hard work is a two ways street. You get exactly what you put in, but there is no time in the equation; only patience.

Thomas Edison put this quote straight forward: “Our greatest weakness lies in giving up. The most certain way to succeed is always to try just one more time.” I may be pain in the a*s for saying this ten times throughout my articles (if you are regular reader), but Thomas took 10.000 failures before he invented the light-bulb. “Just one last time” became 10.000 before he succeeded.

While this is true for the pickers, the metaphor gives its meaning. It’s something that you say which means everything that happens to you is a result of your own actions.

Reap what you sow, lie in the bed that you made are proverbs that have more or less a similar meaning that today is the result of yesterday and tomorrow depends on what you do today. Lessons learned from karma are also a good example of the meaning of such proverbs.

When you give some cash these days, probability says that you won’t get it back.

Away from the sarcasm, giving can be done with helping hand, not only by monetary value. Everything that we spend our energy on will return back in dozen ways that will be on our behalf. So when we give something (advice, money, investment and time to a particular thing) we will reap its results in different values. The ulcer in this statement is ‘waiting to get those results back’. That’s what screws it.

If we give by calculating the values, we will never get the outcome.

So give without the need to take back. That’s the true “you get” after “you give”.

4. What you see in others – exists in you

While the previous three were similar, this one stands out because it has nothing to do with giving and getting.

We only understand what we can formulate in our mind as a picture. So when we see the news and hear things we don’t want to hear, we have difficult time to acknowledge that as a fact. “This guy killed 30 people with his truck”, “man killed his wife”, “another bombing attack in Chicago”, or other baloney things we cannot accept. It’s because those things don’t exist in us.

When we see a person’s “true colors” we see that personalities in us, because we can formulate a picture of those personalities. A man leaving his shoes to a homeless guy will spark a visual image that we are able to do that.

“If someone isn’t what others want them to be, the others become angry. Everyone seems to have a clear idea of how other people should lead their lives, but none about his or her own.” ― Paulo Coelho

Judging is rated as the lowest thing a person can do. Visionaries talk more about ideas and less about events, but never judge other people. It’s okay to have an opinion, but wasting your time on your “neighbours” will never be productive.

6. Radiate and give LOVE – and love comes back to you

The best thing about the species of this earth is the ability to love. It’s the things that strives people to wake up in the morning and chase for their vision.

Everyone around you needs love. With this powerful emotion, people are capable of moving mountains. Religion is all about love and respect, while the world fights what’s the truest script. If you see the concept of all gods, it’s the ability to radiate love all around. It’s disturbing that people are so brainwashed and ignorant to fight over this topic.

RADIATE AND GIVE LOVE TO ENJOY YOUR LIFE!