As a teenager Coelho deeply wanted to become a writer. When he told his mother about his wish, she responded with “My dear, your father is an engineer. He’s a logical, reasonable man with a very clear vision of the world. Do you actually know what it means to be a writer? It’s funny that Coelho, common for him because he was a policy debater when he was in high school, concluded that “a writer always wears glasses and never combs his hair and has a duty obligation never to be understood by his own generation “among dozens of things.

Passing over a turbulent life, including mentally institutionalized, being a hippie, using drugs, and being arrested for “subversive” activities by the ruling military government, Coelho made it out of the mud.

In 1986, Coelho walked the 500-plus mile Road of Santiago de Compostela in northwestern Spain, which he claims to be a turning point in his life. On the path, Coelho had a spiritual awakening, which he described autobiographically in “The Pilgrimage”. In an interview, Coelho stated (In 1986) “I was very happy in the things I was doing. I was doing something that gave me food and water – to use the metaphor in “The Alchemist”, I was working, I had a person whom I loved, I had money, but I was not fulfilling my dream. My dream was, and still is, to be a writer.” Coelho would leave his lucrative career as a songwriter and pursue writing full-time.

Listing his success afterwards can be endlessly described. However, he left us golden words in his books, writings and speeches which can be prescribed as 50 Paulo Coelho quotes to always carry inside our conscious, and if we are powerful enough, in our subconscious, since some non-revealed sources claim that our subconscious is 30.000 more powerful than our conscious. 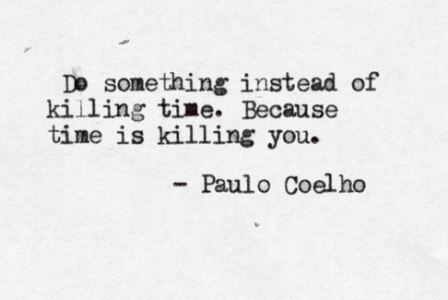 2. ”Every blessing ignored becomes a curse”

3. ”No reason is needed for loving”

5. ”Love can consign us to hell or to paradise, but it always takes us somewhere”

6. ”Life was always a matter of waiting for the right moment to act”

10.”When a person really desires something, all the universe conspires to help that person realize his dream”

11.”We have to stop and be humble enough to understand that there is something called mystery”

12.”You can become blind by seeing each day as a similar one. Each day is a different one, each day brings a miracle of its own”

13.”You drown not by falling into a river, but by staying submerged in it”

14.”We will only understand the miracle of life fully when we allow the unexpected to happen”

15.”The two worst strategic mistakes to make are acting prematurely and letting an opportunity slip; to avoid this, the warrior treats each situation as if it was unique and never resorts to formulae, recipes or other people’s opinions”

16.”If you pay attention to the present, you can improve upon it”

18.”It is the hand that evokes love and creates a twin soul for every person in the world”

19.”The language that everyone on earth was capable of understanding in their heart is love”

21.”Life will be a party for you, a grand festival because life is the moment we’re living right now”

22.”If you can concentrate always on the present, you will be a happy man”

24.”It is we who nourish the soul of the world”

25.”Remember that wherever your heart is, there you will find your treasure”

26.”There is only one thing that makes a dream impossible to achieve: the fear of failure”

28.”Tell your heart that the fear of suffering is worse than the suffering itself”

29.”There’s no such a thing as coincidence”

30.”People need not fear the unknown if they are capable of achieving what they need and want”

31.”Nothing can substitute experience”

32.”When someone makes a decision, he is really diving into a strong current that will carry him”

33.”Because there is a force that wants you to realize your Personal Legend; it wets your appetite with a taste of success”

34.”People learn, early in their lives, what is their reason for being. Maybe that’s why they give up on it so early”

35.”People are capable, at any time in their lives, of doing what they dream of”

36.”To realize one’s destiny is a person’s only real obligation”

37.”The Soul of the World is nourished by people’s happiness. And also by unhappiness, envy and jealousy”

38.”Everyone seems to have a clear idea of how other people should lead their lives, but none about his or her own”

39.”At a certain point in our lives, we lose control … and our lives become controlled by fate”

40.”Dreams are the language of god”

42.”We make a lot of detours, but we’re always heading for the same destination”

43.”There is only one way to learn and it’s through action”

44.”Everything on the face of the earth has a soul, minerals, vegetables, animals, or even just a simple thought”

45.”If you start promising what you don’t even have yet, you’ll lose your desire to work towards getting it”

46.”Every search begins with beginner’s luck”

47.”Every search ends with the victor’s being severely tested”

48.”Everything you need to know you have learned through your journey”

49.”Everything we see … is just the visible part of reality”

50.”Every person on earth plays a central role in the history of the world”