Albert Einstein simplified his life to focus on his work, socks were unnecessary, a leather jacket would never knew replacement and egg be boiled in soup water to save time cleaning up hot.

Einstein once declared that his second greatest idea after the theory of relativity was to add an egg while cooking soup in order to produce a soft-boiled egg without having an extra pot to wash. He sure did have a taste of humor.

Aside from his work, his pleasures were few, sailing and his violin. He worked more like an artist than a scientist arriving at a theory not so much about experimental deduction but confidently by intuition.

He had a fresh look at any question that was coming in his way. In that regard Einstein was among the greatest man of science of all time and he could of find where the question is, while most people look for answers to the wrong questions.

While Albert Einstein has beautiful list of quotes, they stand no match for this written masterpiece. 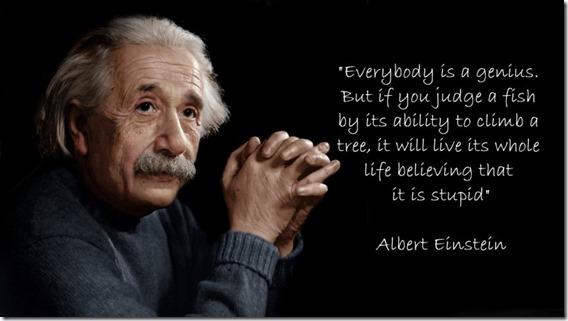 “How strange is the lot of us mortals! Each of us is here for a brief sojourn; for what purpose he knows not, though he sometimes thinks he senses it. But without deeper reflection one knows from daily life that one exists for other people — first of all for those upon whose smiles and well-being our own happiness is wholly dependent, and then for the many, unknown to us, to whose destinies we are bound by the ties of sympathy.

A hundred times every day I remind myself that my inner and outer life are based on the labors of other men, living and dead, and that I must exert myself in order to give in the same measure as I have received and am still receiving…

“I have never looked upon ease and happiness as ends in themselves — this critical basis I call the ideal of a pigsty.

The ideals that have lighted my way, and time after time have given me new courage to face life cheerfully, have been Kindness, Beauty, and Truth.

Without the sense of kinship with men of like mind, without the occupation with the objective world, the eternally unattainable in the field of art and scientific endeavors, life would have seemed empty to me. The trite objects of human efforts — possessions, outward success, luxury — have always seemed to me contemptible.

“My passionate sense of social justice and social responsibility has always contrasted oddly with my pronounced lack of need for direct contact with other human beings and human communities. I am truly a ‘lone traveler’ and have never belonged to my country, my home, my friends, or even my immediate family, with my whole heart; in the face of all these ties, I have never lost a sense of distance and a need for solitude…”

“My political ideal is democracy. Let every man be respected as an individual and no man idolized. It is an irony of fate that I myself have been the recipient of excessive admiration and reverence from my fellow-beings, through no fault, and no merit, of my own. The cause of this may well be the desire, unattainable for many, to understand the few ideas to which I have with my feeble powers attained through ceaseless struggle.

I am quite aware that for any organization to reach its goals, one man must do the thinking and directing and generally bear the responsibility. But the led must not be coerced, they must be able to choose their leader. In my opinion, an autocratic system of coercion soon degenerates; force attracts men of low morality.

The really valuable thing in the pageant of human life seems to me not the political state, but the creative, sentient individual, the personality; it alone creates the noble and the sublime, while the herd as such remains dull in thought and dull in feeling.

“This topic brings me to that worst outcrop of herd life, the military system, which I abhor… This plague-spot of civilization ought to be abolished with all possible speed. Heroism on command, senseless violence, and all the loathsome nonsense that goes by the name of patriotism — how passionately I hate them!

The most beautiful experience we can have is the mysterious.

It is the fundamental emotion that stands at the cradle of true art and true science.

Whoever does not know it and can no longer wonder, no longer marvel, is as good as dead, and his eyes are dimmed. It was the experience of mystery — even if mixed with fear — that engendered religion.

A knowledge of the existence of something we cannot penetrate, our perceptions of the profoundest reason and the most radiant beauty, which only in their most primitive forms are accessible to our minds: it is this knowledge and this emotion that constitute true religiosity. In this sense, and only this sense, I am a deeply religious man… I am satisfied with the mystery of life’s eternity and with a knowledge, a sense, of the marvelous structure of existence — as well as the humble attempt to understand even a tiny portion of the Reason that manifests itself in nature.”

In this essay it’s precisely shown how Albert Einstein saw the world in a dazzling way through the hands of a genius.