“Ricard sees living a good life, and showing compassion, not as a religious edict revealed from on high, but as a practical route to happiness.”

A French genetic scientist may seem like an unusual person to hold the title – but Matthieu Ricard is the world’s happiest man, according to researchers.

The 66-year-old turned his back on Parisian intellectual life 40 years ago and moved to India to study Buddhism. He is now the happiest man on earth, a close crony of the Dalai Lama, and respected western scholar of religion.

It seems daily meditation has had other benefits – enhancing Mr Ricard’s capacity for joy.

Neuroscientist Richard Davidson wired up the monk’s skull with 256 sensors at the University of Wisconsin as part of research on hundreds of advanced practitioners of meditation.

The scans showed that when meditating on compassion, Ricard’s brain produces a level of gamma waves – those linked to consciousness, attention, learning and memory – ‘never reported before in the neuroscience literature’, Davidson said.

The scans also showed excessive activity in his brain’s left prefrontal cortex compared to its right counterpart, allowing him an abnormally large capacity for happiness and a reduced propensity towards negativity. 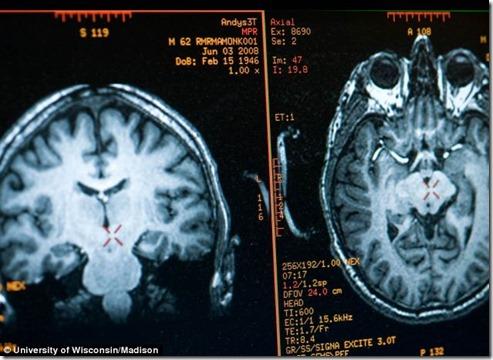 Research into the phenomenon, known as “neuroplasticity”, is in its infancy and Ricard has been at the forefront of ground-breaking experiments along with other leading scientists across the world.

‘We have been looking for 12 years at the effect of short and long-term mind-training through meditation on attention, on compassion, on emotional balance,’ he said.

‘We’ve found remarkable results with long-term practitioners who did 50,000 rounds of meditation, but also with three weeks of 20 minutes a day, which of course is more applicable to our modern times.’

He added to AFP: ‘It’s a wonderful area of research because it shows that meditation is not just blissing out under a mango tree but it completely changes your brain and therefore changes what you are.’

He believes meditation can alter the brain and improve people’s happiness in the same way that lifting weights puts on muscle.

Mattieu Ricard has spoken about The Art of Meditation in a video hosted by the charity RSA. Here are some hints and tips…

1. A healthy mind should act like a mirror – faces can be reflected in a glass but none of them stick. Use the same technique with thoughts – let them pass through your mind but don’t dwell.

2. It’s impossible to stop thoughts from coming but focusing on a particular sound or the breath going in and out calms the mind, giving greater clarity. Controlling the mind is not about reducing your freedom, it’s about not being a slave to your thoughts. Think of it as directing your mind like a boat rather than drifting.

3. Be mindful – pay attention to the sensations of your breath going in and out. If you notice your mind wandering simply bring it back to focusing on your breath. This is known as mindfulness. You can apply it to other sensations to bring you into the ‘now’ rather than dwelling on the past or future. You could focus instead  on heat, cold and sounds that you hear.

4. Once you’ve achieved some skill in this you can use that to cultivate qualities such as kindness, or dealing with disturbing emotions. He says everyone has felt all-consuming love but usually it lasts for about 15 seconds, but you can hold on and nurture this vivid feeling by focusing on it in meditation. If you feel it becoming vague you can consciously revive it.

5. Like when playing the piano, practising the feeling for 20 minutes has a far greater impact over time than a few seconds.  Regular practise is also needed like watering a plant.

7. You will see benefits in stress levels and general wellbeing as well as brain changes with regular practise in a month. Those who say they don’t have enough time to meditate should look at the benefits: ‘If it gives you the resources to deal with everything else during the other 23 hours and 30minutes, it seems a worthy way of sending 20 minutes,’ Ricard says.

‘Try sincerely to check, to investigate,’ he said.

‘That’s what Buddhism has been trying to unravel – the mechanism of happiness and suffering. It is a science of the mind.’