I firmly believe every child is born clean. Without negative emotions, without bad thoughts, and nothing that would make a toddler angry on a long term. Not a saint, nor a sinner. Just one clean mind. That’s the first phase we all go through.

The second phase, and the one that lasts, is the ‘sponge.’ Either we see our parents fight, hear cursing on the streets, see a fight between people, or a very familiar stress these days, a dog bite, all we experience drowns like water in a sponge. We form character.

I imagine it as innocent human being going to fight world war. You are man, you’re chosen, and you have to do it. Nothing that can make you hide out the call. You go to war.

You suck the ugliest experiences out there. You see people scam themselves, cheat on love, thieves steel on the streets, fights, provocations, bad habits (such as smoking, drinking, and narcotics.) This is not what happens in a ghetto anymore. This is what happens everywhere on the streets, only not that frequent everywhere. 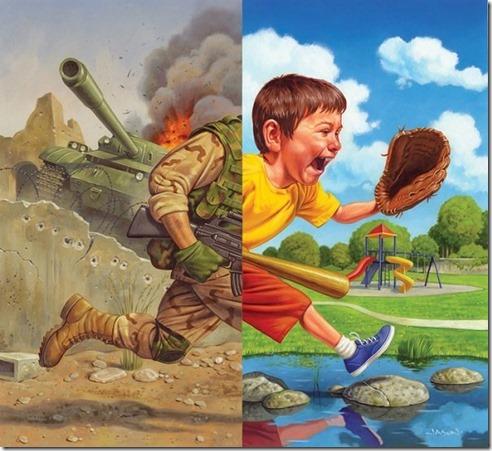 The following ways represent that going to war with ourselves, we can actually create peace of mind.

1. Think below the rock

Have you ever turned a rock, and see those little white worms? Those tiny rascals work in the shadows.

In our heads we have those little worms too.

No day is bad because of the day, you know? We cannot feel nervous and stressed all of a sudden. It’s always a white worm in there causing the stress.

Some have few, some have many of them and they cause turbulence and mess inside. Those poor ideas flow in actions throughout the day.

Your job is to think very deep, below the rock, and smash those worms.

Very common ‘white worm’ is shortage of sleep. No sleep causes chaos in the day. Smoking causes cancer, for god sake. It’s written on the box. There could be no benefit from it.

Have a wrong job is also one hell of a white worm. We have talented architects working as a waitresses their whole lives. We have born singers cutting grass. Those talents never seem to evaluate the white worms.

Think about it deep. Evaluate your worms. Your stone cannot be clean with worms.

2. Go to war with negative thoughts

It’s the precise description. We should have a war with negative thoughts.

So many people ignore the fact that negative thoughts ruin their life, it has become an automatic response. We are automatic pessimists.

It’s time to change. To create an army of positive thoughts. Sometimes we many liars inside our head to achieve this. Because no one guarantees you positive life, or lot of money, or girlfriend/boyfriend with good personality. Nothing is guaranteed.

Creating a army of positive thinking is what fixes the problem. Every time you think of something bad, turn that thing upside down, on the other side of the coin.

Maybe because reality is one big nothing, unless we make something out of it. We can only act upon our lives, one way or other. The reality is misery, if we lay in bad all day and do nothing.

The brain mechanism will always find a way to come up with de-motivation. Have you ever run a marathon?! It’s just what he does.

Flip the coin until you get the other side, and THEN you get out to spend that coin. Go to war with pessimism until you raise your optimist.

There are 3 definite thieves that steal peace of mind.

Greed has two sides, a positive greed, and a negative one.

The word greed itself has a negative meaning “intense and selfish desire for something, especially wealth, power, or food.” It’s a bit meaningless to argue about that. But positive greed can cause motivation. It’s debatable:

Many consider greed as an unpleasant characteristic but greed is what makes rivalry and success. When there is no greed, everyone would be “idle” or in other words, does not take any action in life. There must be greed and rivalry to have success and achievements. therefore, greed can be the reason why we exist.

On the other hand, greed is bad:

If wealth were chunked equally, then greed would have no bad indications because it would be great for everyone to have and get even more of what we want. When things like food are not shared equally and some of us have access to good and healthy food and others do not, then our lifestyle is causing division while others suffer when we just want more for ourselves.

Hatred has no good sides, and is no debatable. However you focus on it, there is only one outcome.

The word hate, often defined as the opposite of love, is the emotion caused by fear that projects ourselves to someone else. Normally this is a involuntary feeling, which whilst is operating feeds delusional thinking to the side of the brain dealing with rationality and justification, this helps us by making us feel unaccountable for our feelings, helping us to deny responsibility.

“Two prison camp survivors meet 50 years after they were first captive. One says to the other, “Have you forgiven Adolf Hitler yet?” The second man is horrified. “Of course not,” he says, “I will never forgive him, ever.” And the first man responds softly, “So you are still in prison, my friend.”

The last, and in my opinion, the most common is ignorance.

Lack of knowledge and information is the main cause in the greater piece of everyday problems.

Few weeks back, I was coding on my website, but I lack the knowledge of it. I had severe headache that night, and we all know the intruder. It was my stubborn ignorance that caused it.

Many fights and quarrels occur because of ignorance. Not knowing the background of the participant, without asking a couple of questions before making any conversation, we can cause a massive fight. Few months ago one guy killed the other guy (literally) because he cut his way with his car. Both being ignorant caused death, one guy in jail for 10 years, and two families without fathers. It was a tiny quarrel with tons of ignorance.

Both 3 thieves can turn as big as life and death situations. Eliminate them before they go out of the rails.

We need to go to war with ourselves. Meditation relives stress because we already have lot of stressful water in the sponge. We do things similar to meditation to delete things that once did not exist. We need to win the war in our heads, and we need to do it now!