When I first saw a guy explaining on interview that did this so-called “mirror of the soul” in the Amazonian jungles, I thought it was a heavy narcotic experience. But when I lurked deeper, I found something bizarre.

Ayahuasca is an Amazonian plant mixture that is capable of inducing altered states of consciousness, usually lasting between 4 to 8 hours after ingestion. Ranging from mildly stimulating to extremely visionary, ayahuasca is used primarily as a medicine and as a shamanic means of communication, typically in a ceremonial session under the guidance of an experienced drinker.

The main ingredient of this jungle tea is a vine, Banisteriopsis caapi, which like the tea itself is also called ayahuasca (which means ‘vine of the soul’ or ‘vine with a soul’). The secondary ingredient is either chacruna (Psychotria viridis) or chagropanga (Diplopterys cabrerana), plants that contain a relatively high amount of the psychedelic substance DMT.

Shamans or medicine men take ayahuasca to communicate with nature or to see what is causing a patient’s illness on a spiritual level. In Brazil several religions can be found that pivot around gatherings where ayahuasca is taken by all participants. Drinking ayahuasca and singing together takes them into a healing and inspiring kind of trance. 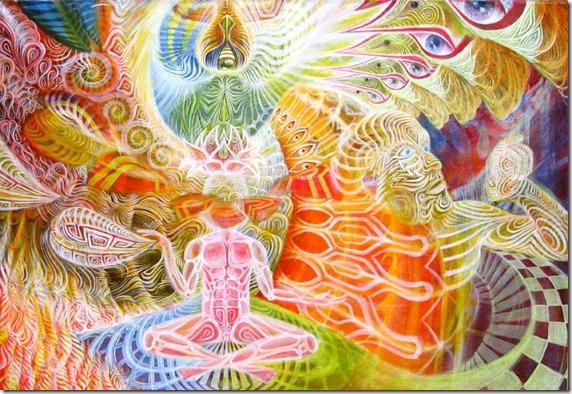 Why would someone use this ‘drug’ ?

Although not unique to ayahuasca, there are many fascinating reports about people who have been healed from comprehensive problems, like addiction or depression, during one or more sessions.

This is how Conor Creighton explains his experience:

“I spent Saturday night rolling on the floor of a loft apartment in the Prenzlauer Berg neighborhood of Berlin. When I wasn’t rolling, I was in the bathroom shoving my fingers down my throat, or sitting on the john trying to take a dump. I cried like a mother at a wedding. I kicked my feet in the air like dogs do when they’re sleeping, and on one occasion—in tandem with the feet—I let my hands dance in front of my face like the last raver in the field on the last night of summer.

For what felt like three days, I went from bathroom to floor and back again. When I finally got it together enough to wobble onto the balcony and smoke a cigarette, I realized I’d only been under for four hours. Ayahuasca, yagé, the truth vine, the madre, or whatever you call it was not only the strongest drug I’ve ever tried but easily the most powerful experience I’ve ever had.

It’s also illegal in Germany, so in order to do it, you have to know someone who knows someone who knows whichever shaman is in town giving out the goofy juice that week. And it’s not cheap—it costs upwards of $230 per session. Once you’re on the shaman’s list, you receive an email explaining how you should prepare for the ceremony. No intercourse, no meat, no dairy, no salt, and no other drugs for a week beforehand. The address is kept secret until the final day.

You’re told to pack a mat, a blanket, a bottle of water, some fruit, and a bucket with a lid so you can puke into it and then throw it away. I didn’t have a bucket, so I brought a beaker with a seal and then spent the whole way there, and much of the ceremony, worrying that it wouldn’t be big enough to hold all my chunks when I eventually blew them.

Ayahuasca has become quite popular in yoga circles and, even though it embarrasses me a little to put these three words together, the “Berlin meditation scene.” For late thirtysomething affluent vegans who don’t go to clubs anymore and who spend Christmas in India so they don’t have to visit their parents, it’s about as hip as partner swapping.

There were about 25 people in the apartment when I arrived, and my friends weren’t even there yet, so I mingled with a bunch of people stretching in Thai pants or lying on the floor petting one another. The room was hot with bodies. I sat in a corner. Beside me was an American kid whose psychiatrist had actually prescribed the ceremony.

“I was pretty heavily addicted to marijuana,” he said.

“What kind of psychiatrist prescribes this?” I asked.

“An expensive one,” he said.

There was a German guy at my feet tucked under a duvet on a blow-up bed.

“Yes. What should I expect?”

“The universe,” he said. “I hope you get to see the universe.”

And then everyone lay down while the shaman, a guy with a beard and a ponytail and skin the color of stained mahogany, began to explain what was about to happen to us. I can’t recall much of what he said, because what happened next was insane. Ayahuasca is comparable to other drugs but only in a way that walking briskly with your arms outstretched is comparable to flying. 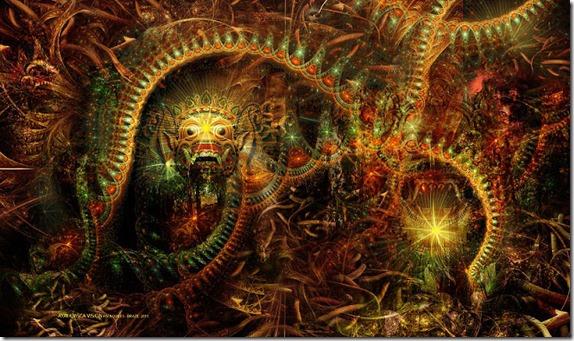 It’s very hard to put the experience into words, but here goes:

The beginning—let’s call this the good part—started off with the shadows on the walls losing shape and tiny golden trails zipping in front of my eyes. So far, pretty normal for anyone who’s taken acid, mushrooms, or trippy pills. On either side of me, people were dry-heaving into their buckets. They made a noise like cows being impaled on traffic signs. But I wasn’t nauseous. F*ck no! At that time, I was dropping into a panoramic collage of fractals and bright colors and jungle foliage and extreme well-being.

With no exaggeration, I can say that moment was probably the most blissed-out of my whole life. And I don’t give that away lightly. I was a child of rave, and I spent a good chunk of the last decade hugging strangers and licking my eyebrows and worrying about how much water I had or hadn’t drunk.

It was like the universe was wrapping me in giant mutating arms and filling me full of love. I saw God, and I was God, and everything was God.

For most of this part, the good part, I just lay on my back with my eyes closed in a little euphoric bubble. And if only that could have lasted—because, pretty soon, the bad part kicked in. In one incident after the next, I revisited traumatic chapters of my childhood.

It played out like some celebrity retrospective—only instead of showing the best clips from my long career, I was forced to witness the moments that had bruised me most. I was in the womb feeling my family’s stress, in school running from bullies, and in my teenage bedroom listening to Smashing Pumpkins while writing poetry with rhymes like “blunt knives” and “short lives.”

In the middle of this trip down misery lane, I broke out in feverish sweat and felt the need to puke. But like I said, I was worried my container wouldn’t handle my load, so I got up and wobbled to the bathroom.

My stomach was a mess, but I couldn’t puke, so I tried to s*it. Somehow I’d got it into my head that the only way to end this hell-ride was to push the ayahuasca out of my body through whichever hole was most compliant. Some drugs allow you to look at yourself from a distance. If that had been the case, I imagine I’d be looking at myself doing some kind of twerk-c*m-lapdance for the toilet bowl’s pleasure, with my track pants around my ankles.

Defeated, I went back out to the room, lay down on my mat, and suffered. Really suffered. When I wasn’t terrified, I was crying big tears of sadness. The golden trails would come and go, and I do remember seeing my p*nis presented in front of me as a giant tower reaching into the clouds—which was kind of cool—but for the most part, I was in seven circles of plant-based hell.

Some time later, I saw my friends creeping out of the room onto the balcony, and I worked up the courage to follow them. Imagine a plane crash, where the front of the plane explodes in two and the rear somehow lands on flat ground and everyone from Row F backwards survives. Picture the survivor’s faces. That’s how we looked.

We hung out on the balcony for a while smoking, occasionally puking into buckets, and trying to make sense of things until someone offered to drive us all home, which was a great and horrible idea because I never would have gotten home on my own, but the driver couldn’t distinguish between red and green yet.

They say that one night of ayahuasca is like ten years seeing a psychiatrist. It is not a recreational drug.

Afterwards, on the way home, we talked about going to a club, but in the end, all we really wanted was to be wrapped up in cotton wool and left in a corner with fresh water.

I fell asleep and the next day woke up early, feeling amazing. And for now, that’s how things have stayed. Ordinarily I’m pretty anxious. I’m not a good sleeper, I’m shy, and I’m pretty horrible at making decisions. But so far, all that’s disappeared. Whatever happened that night shook my little blockages free—or, as a psychiatrist would put it, broke my coping habits.

In the Amazon, if you go on an ayahuasca retreat, you normally spend three long nights in a row sifting through all your s*it. In the first few hours after coming down, I thought I’d never smoke a joint again—let alone consider ayahuasca again.

However, now I’m pretty sure I would. Watching all the traumatic experiences that have touched your life sweep past like a dream helps to place them in perspective: They’re over. In a way, it takes you back to your original essence in nature, and that’s no bad thing if, like me, your regular connection with nature is watching your tomato plants slowly die on the windowsill each summer.

Oh, and seeing your d*ck as tall as a building, rendered from solid, impenetrable stone is something all insecure young boys, who grow into secretly insecure men, need to see at least twice.”

I didn’t want to edit anything he said, because this guy has a way of grasping moments with words.