Psychopathy is among the most difficult disorders to spot. The psychopath can appear normal, even charming. Underneath, they lack conscience and empathy, making them manipulative, volatile and often (but by no means always) criminal. They are an object of popular fascination and clinical anguish: psychopathy is largely impervious to treatment.

It is important to note that the vast majority of people with antisocial tendencies are not psychopaths.

However, there is a large dose we didn’t mention above.

Today, psychologists are beginning to see “psychopathy” as a spectrum that we all lie on to some degree.

At extreme levels, psychopathy can lead to a lot of antisocial and destructive behaviors. On the other hand, in moderate levels, it can actually come with interesting advantages such as highly successful traits.

For example, psychopaths tend to be very focused, ambitious, and confident when it comes to achieving their goals. A person who has very low levels of psychopathy probably isn’t very good at standing up for themselves and what they believe in.

According to psychiatrist Kevin Dutton, one key difference between “clinical psychopaths” and “functional psychopaths” is that the functional ones know the right context to exhibit their psychopathic characteristics.

While some people may look at this list and think it’s sad and concerning that psychopaths are effective in these highly regarded positions, we’ll look at it from a different angle: What can we learn about why psychopaths are successful in these areas of life?

The goal is to pick apart what exactly makes psychopaths successful, and how we might be able to apply some of these lessons to our own lives.

Psychopathy as a “mixing board” with different faders

One metaphor used to describe psychopathy is to view it as a mixing board, like one you would find in a music studio with various faders and knobs that can be turned “up” and “down.”

Kevin Dutton identifies many different faders that contribute to psychopathy, the main ones include:

Focus – Psychopaths are really good at keeping their eyes on the prize while ignoring all other distractions. Studies show they out-perform the general population on the Stroop test, a test designed to measure focus and willpower.

Ambition – Psychopaths are very persistent with their goals, and often won’t stop pursuing them until they have accomplished them. This can also make them very stubborn and irritable if they don’t get what they want.

Confidence – Psychopaths truly believe in themselves and their values, often placing themselves above others, having a tendency toward narcissism and grandiosity.

Cold empathy – Psychopaths are really adept at reading people’s thoughts and feelings, while not attaching to them in a personal or sympathetic way.

Social charm – Psychopaths can often be very charming and persuasive, which is why some studies show people rate psychopaths as more attractive.

Risk-taking – Psychopaths love engaging in high risk situations. Their minds highlight the potential rewards of a situation, while downplaying the risks, which makes them particularly fearless.

If you turn these faders all the way up, there’s a good chance you’ll find a “clinical psychopath” – someone who seeks their goals by any means necessary, takes extremely dangerous risks, and isn’t afraid to hurt people to get what they want.

However, at certain levels, these faders can create an interesting recipe for success.

One example Dutton gives in the book is how surgeons share many traits with psychopaths such as laser sharp focus, engagement with high risk situations (often “life or death”), as well as a lack of warmth and empathy.

One world class surgeon who scored high on psychopathy describes how he can’t possibly empathize with every patient or he would quickly be worn down by emotional fatigue.

Good doctors sometimes need to be able to focus on their job without emotionally investing in every single patient, especially when they have to face a lot of different failures and “bad news” over the course of the day.

This doesn’t mean doctors shouldn’t empathize with their patients, but that sometimes being able to turn that fader “up” and “down” can be incredibly beneficial.

In the same way, many functional psychopaths thrive in high power positions which require making “tough emotional decisions.” Take for example a CEO who needs to fire people because their company isn’t competing so well, or a politician who needs to make cuts to a program to meet their budget.

We can now begin to see how psychopathic traits are advantageous in certain situations.

As mentioned before, CEO is one of the most common professions for functional psychopaths. Let’s take a look at how certain psychopathic traits translate to great leadership: 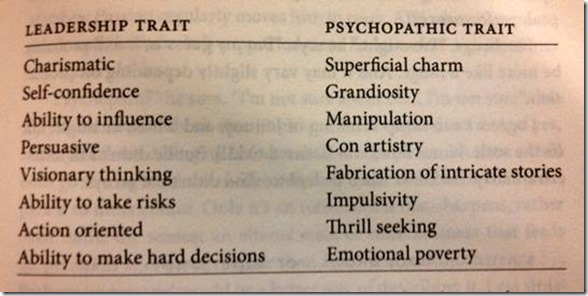 In the context of leadership, psychopathic traits can be very beneficial. This table helps explain why CEOs, politicians, salespeople, and lawyers are often good positions for functional psychopaths.

Psychopaths have a mental toughness to take action and make difficult decisions under high pressure situations, while still being able to use their charm and social skills to get people onboard with their goals and mission.

In a way society needs a healthy level of psychopathy to work. And without functional psychopaths, it’d be much more difficult to find people who are willing to step up as leaders and guide organizations to achieve society’s goals.

Kevin Dutton theorizes that the origins of psychopathy can be explained by our evolutionary history.

Our evolutionary tribes often depended on “alphas” to maintain order which included fighting off potential threats and intruders. These alphas were often cold, ruthless, and fearless. They likely carried the “warrior gene” which is often found in high-rated psychopaths.

The usefulness for psychopathic traits throughout our evolution is a good reason why these traits probably still exist today, though certainly they play out in different ways.

A healthy dose of psychopathy

According to Dutton, there could be an “optimal level” of psychopathy where we are most functional:

For individuals who suffer with low self esteem, high anxiety, or lack of focus and ambition – a healthy dose of psychopathy might actually be a very good thing.

In this way, we could potentially learn a lot from psychopaths about confidence, success, and motivation.

The Wisdom of Psychopaths has some really interesting stories and pearls of wisdom from various psychopaths – both “functional” ones like surgeons, CEOs, and soldiers, as well as “clinical” ones like murderers, thieves, and criminals.

It might seem scary to “learn” something from a psychopath, but I think it’s important to consider that everyone potentially has something useful to teach us that can benefit our lives.

And even though we shouldn’t strive to be a psychopath, perhaps we should turn up some of the faders on these psychopathic traits every now and then.