Working on a website, coding errors, eliminating render-blocking Java Script and CSS, can be really upsetting, especially if you are rookie like me.

After 2 hours of coding I knew two things. I was really upset and I wanted pizza. But as I workout for so long, I didn’t really wanted to ‘cheat meal’ a 12k run that day. So I got into a little research.

In any given day, more than 40 million Americans will eat pizza. It is considered the most popular meal in the world, and definitely one of the favorites in the US.

The love for this food is such that the Department of Agriculture recently released a report on the levels of consumption. It described the meal as “a contributor of nutrients of public significance in the American diet, including total fat, calcium and sodium.” 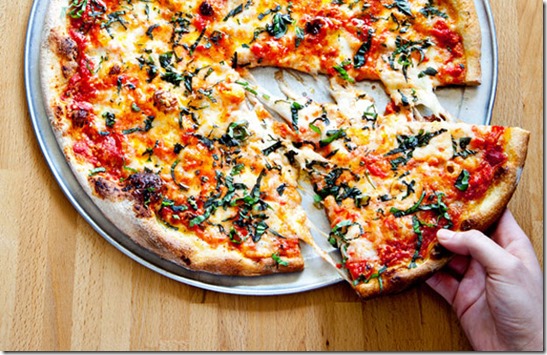 However, just because it’s fancy, does that mean it’s bad for you?

Experts would argue that pizza as such is not bad for your health – the problem is when and how you eat it.

According to the report, 13% of the USA population consume pizza on any given day increasing to 22% when children and teenagers are included.

This wouldn’t be of such concern if it was mainly a homemade dish.

Giuseppe Russolillo, president of the Spanish Association of Nutritionists, said: “You have to bear in mind that while in the majority of Italy this is an artisanal product, in the US it is more related to ‘junk food’.”

Most of the time it is bought from a fast food chain or frozen at a supermarket, he says.

Not all pizza is created equal though. Some slices are a nutritious addition to your diet while others are nutritional nightmares. Knowing the difference between a healthy piece of pizza and an unhealthy one will let you enjoy this much-loved food more often and guilt-free.

Pizza made with a variety of fresh vegetables, such as broccoli and spinach, have a bit more vitamin K but not a huge amount. Fresh pizza is a better choice if you want to retain the small amount of vitamin K the vegetables contain. Freezing pizza can destroy any vitamin K it contains.

The nutritional value of our pizza depends on what we put on it. The sauce is made from tomatoes, which add vitamin C and vitamin A to your slice, but it can contain a lot of salt too. If we want extra sauce on our pizza, opt for a low-sodium version to get the nutrients without all of the sodium. Cheese pizza is lower in saturated fat than pizza with pepperoni or sausage, and it also supplies a good amount of calcium for strong bones and teeth. Vegetable pizza is even better because it contains vitamin C, vitamin A and more fiber than cheese or meat varieties. Pile on the peppers, mushrooms, spinach, tomatoes and onions for a healthier pizza meal.

When You Choose Pizza Choose Wisely

Make homemade pizza instead. Make your own pizza sauce by pureeing cooked and peeled tomatoes with oregano and garlic powder. Use low-fat mozzarella cheese so that your child gets plenty of calcium from his slice without all of the saturated fat. Skip the pepperoni and high-fat meats in favor of your child’s favorite vegetables. Add black olives for some heart-healthy unsaturated fat.

Bottom line: It depends on how it is made, but if you order out from a pizza place, its probably not healthy. Homemade pizza, on the other hand, can be very healthy with the right ingredients.

Giuseppe Russolillo stated perfectly: If you want to eat pizza, do it with caution and moderation.” I think he missed “when you do coding” too!