Misery is solid word to describe how most people, almost 80 percent, (The Pareto Principle) waste time throughout the whole life.

With life as short as the flutter of an eyelash, why would we want to fill our sight with anything but the extraordinary? It’s pretty important question we need to answer before reading the whole concept of the paradoxical life.

We give too much credit, attention, and time, to things as stupid as ”the guy who didn’t wave back”, or to ”the time we slipped in public.” As Mark Manson explains: We give too many f*cks to things that don’t need any f*cks given. I would even use the word f*ck it as a motivational factor!

In this world we live in a complicated paradoxes. This is better than this, but how is that possible?

Now I will explain why the paradox drags people in misery. 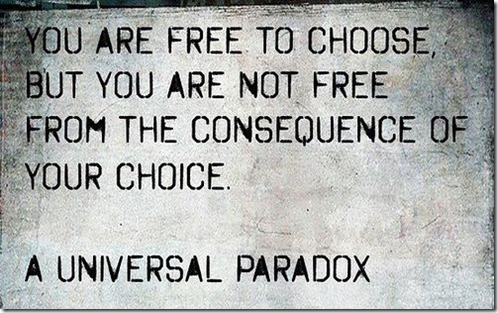 1. Working is better than sitting

Did you know that standing in one place is harder than walking? There’s a whole science behind it (see Ti Zhao’s answer).

On the other hand, working on a task, or even better, on your life visions and goals is easier than to stand in one place and be lethargic for the rest of your life.

The human brain is made to be curious. It has to be thrilled with things that “feed the rascal” up there, or our life will scale down to be “the old guy who argues who was first in the row to take pension.”

Life is determined by the quality of time we waste in it. We always waste time, one way or another, but the time we waste matters most.

Steve Jobs died when he was 56. And yet 99 percent of the people wouldn’t have the perfect moments attainments he had. Not even in 100 years.

So don’t waste your life on the paradox that seems more logical. You don’t work so you are going to lay down with your pension. Work on something for the rest of your life.

One life is too short for a complete vision. We cannot dare to waste an hour of doing nothing no more (sleep is eligible).

A man who dares to waste one hour of time has not discovered the value of life. – Charles Darwin

2. Text is better than video

We can’t argue over this. Text will always stay better than video, but the future is based on visual content rather than words and letters.

I know exactly that if I put video instead of writing this article, my reach will be 200, maybe 300% bigger, but people become lazy and lethargic when they see moving pictures, and that’s not my vision.

Even the video is produced by someone reading a text! It’s also a controversial topic.

The creativity, the capability to see the whole picture in front of you (as Nikola Tesla did), is all an outcome from rich erudite mind.

If we want a better life, even good values, we have to read! The words hold so much power, that only the ones reading them know. It has to be consisted, every day.

I call it “the hour + of education.” Whatever I do, whenever I am, I stick to one hour of targeted reading in a way that arouses my interests. Doesn’t matter if it’s book, or article, or some answers on Quora.

If you start now, in a year you will have a minimum of 365 hours spend on knowledge without even noticing it.

Education is what remains after one has forgotten what one has learned in school. – Albert Einstein

3. Luck is earned, not given

I think when I read this sentence I changed my world.

We can have friends, or colleagues, that may have luck finding 100 dollars on the street, or getting that jackpot in the casino, but luck in general is attitude and/or behaviour.

In the book “The Luck Factor: The Scientific Study of the Lucky Mind“, Dr. Richard Wiseman describes what luck is after 8 years of scientific study.

He identifies 4 (I think) traits of the personality which add up to making a “lucky” person. He investigated thing such as whether people are born with it, catch it, or can change it …
The traits are along the lines of:

It demonstrates that if you consider yourself unlucky then all is not lost. By changing your attitude and/or behaviour then you can become “lucky”.

One of the most interesting things from the book was that lucky people tend not to brag when things aren’t going so well, and unlucky people moan all day long even for tiny unimportant things that happen to them.

The upshot being that when a good thing happens to a lucky person the unlucky people say “oh my god, why do good things always happen to you?” when in actuality both live through the same amount of bad things.

The difference is that a lucky person doesn’t draw attention to it and thus is deemed by the unlucky person to be not experiencing them at all.

All their life, people are so afraid to fail and make a mistake, that they never try anything “scary.”

On the best commencement speech by Steve Jobs in Stanford University, he precisely says the words: you have nothing to lose, you are already naked.

The other way to see it, is that “no” is not rejection. It’s just a cosmic redirection.

Steven Spielberg was rejected 3 times! The most notable filmmaker of the new Hollywood generation.

I used to destroy my shoes on one specific spike where I park my car. But since I did it twice, now I know exactly where to make a bigger step. I just have it installed in my mind. It’s not like I write on piece of paper to remind myself or dream about that spike.

You will have to be willing to destroy your shoes on spikes (or fail miserably in your working environment) to know where you have to take a bigger step and avoid ruining another pair of shoes.

5. Chasing happiness will make you unhappy

Happy people don’t have the habits to chase an emotion. Moreover, they are on adventure.

In my previous writing I said that adventure is not a safe thing, concluding that, happiness is dangerous. How so?

Well, life is just one big adventure. We even drive under booze, or eat a whole spoon of cinnamon, just to experience how it feels not to be safe for a while, usually ending up as a total disaster.

Going on the right adventure, the one that thrills you, will make you happy, instead of that spoon of cinnamon.

One of the most famous things in the world like “be happy” and “be rich” are not destinations. We have to finally figure that out! Vision is more than money, and adventure is more than happiness, while both will bring you the outcome.

I’ve sensed this 3 years ago, and I finally “broke up” with it 2 years ago.

You can be surrounded by people as much as you want, but if you don’t feel comfortable when you’re alone, then all else is thrown in the casket.

It means that your soul is empty, your values insecure, and you are surrounded by tons of fears.

And all we seek is to nurture them with our friends by finding similar interests between us, making us the slave of the people.

The fix would be: we have to spend time with ourselves. It’s the time of reprocessing the things that happened, and connecting the dots. The time when we give ourselves a meaning, which means that we select what’s important and what’s not important at all.

One of the things that made me comfortable being with me was meditation. I found my vision with it, something I would never ever find if I didn’t look inside my soul.

7. The more choices you have, the less you are going to be satisfied by each

Do you know how many jobs are available in United States? Ask.com says that there are 3.8 million jobs available in America alone.

The choice is massive, and nowadays if someone ask us what do we really want to be professional at, we come up with a confusion. And if we have only tow choices, to be a Lawyer or Designer, the choice is gradually increased because we have only two options (it was just a dull example.)

The choice in the world is gigantic, colossal. It’s really pity to chose misery over all of the available choices.

We have to seek inside for the things on the outside. Read more, work, dare to fail, seek comfort within, and you will be happy and lucky. Every puzzle has an end if we find the parts to solve it.

When I was little I used to find my last pieces of the puzzle under the bed. Maybe you will find some if you seek in the right paradox.