Weighting both, good and evil, we can conclude something.

Good is hard. Good is always fighting the moral principles. It struggles, it punishes itself consecutively. All good people (spirits) that made drastic changes in this world faced adversities during their lifetime. And not an easy ones, but hard ones, usually until death. Take Jesus for example.

BUT, good is the right choice.

Evil is easier, more fulfilling and an easy task. You can smell its power. It’s a physical thing. Evil always loses in the end. Evil has expiration date.

Evil is the wrong choice.

But the next 10 evil quotes will sound so weird that will make you question all the good. They kind of gave me a deep state of thinking … 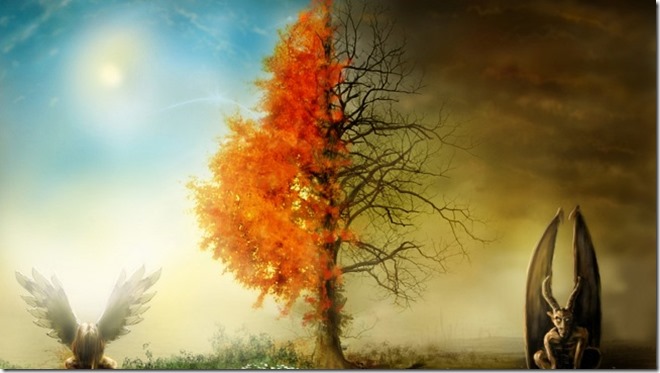 1. Inside each of us, there is the seed of both good and evil. It’s a constant struggle as to which one will win. And one cannot exist without the other. ― Eric Burdon

2. I define a ‘good person’ as somebody who is fully conscious of their own limitations. They know their strengths, but they also know their ‘shadow’ – they know their weaknesses. In other words, they understand that there is no good without bad. Good and evil are really one, but we have broken them up in our consciousness. We polarize them. ― John Bradshaw

3. You underestimate the power of the Dark Side. If you will not fight, then you will meet your destiny! ― Darth Vader (James Earl Jones)

4. Human beings are a disease, a cancer of this planet. You’re a plague and we are the cure. ― Agent Smith (Hugo Weaving)

5. Scientific views end in awe and mystery, lost at the edge in uncertainty, but they appear to be so deep and so impressive that the theory that it is all arranged as a stage for God to watch man’s struggle for good and evil seems inadequate. ― Richard P. Feynman

6. Whatever is done for love always occurs beyond good and evil. ― Friedrich Nietzsche

7. I suspect that here theists and atheists would agree: Human beings have within them the ability to choose evil or good. We wake up each day facing the age-old struggle of good and evil. In some situations, mental illness clouds our judgment . ― Adam Hamilton

9. Words – so innocent and powerless as they are, as standing in a dictionary, how potent for good and evil they become in the hands of one who knows how to combine them. ― Nathaniel Hawthorne

10. We’re all caught up in circumstances, and we’re all good and evil. When you’re really hungry, for instance, you’ll do anything to survive. I think the most evil thing – well, maybe that’s too strong – but certainly a very evil thing is judgment, the sin of ignorance. ― Anthony Hopkins

Do you have any ‘evil’ quotes’? I would be glad to read them in the comments section!