Salmon is commonly prized for its health benefits.

It is a fatty fish that is loaded with Omega-3 fatty acids, which most people don’t get enough of.

However… not all salmon is created equal, unfortunately.

Today, a lot of the salmon we eat isn’t caught in the wild, but bred in fish farms.

The Difference Between Wild and Farmed Salmon

Wild salmon is caught in the wild, in its natural environment… oceans, rivers and lakes.

But half of the salmon sold worldwide comes from so-called fish farms, also known as aquacultures.

The annual global production of farmed salmon has increased from 27,000 to more than 1 million metric tons in the past two decades.

Whereas wild salmon eats other organisms found in its natural environment, farmed salmon is given a processed high-fat feed in order to produce larger fish.

Wild salmon is still available, but global stocks have halved in just a few decades.

Bottom Line: The production of farmed salmon has increased dramatically in the past two decades. Farmed salmon has a completely different diet and environment than wild salmon.

There Are Some Important Differences in Nutrition Composition 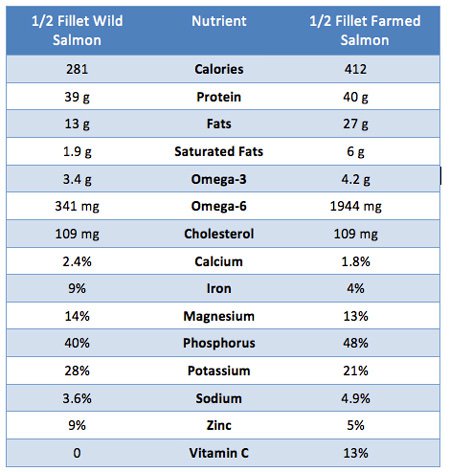 As you can see in the table, nutritional differences between wild and farmed salmon can be pretty significant.

Farmed salmon is much higher in fat… it contains slightly more Omega-3s, much more Omega-6 fatty acids and 3 times the amount of saturated fat. It also contains 46% more calories, mostly from fat.

Farmed salmon also contains some Vitamin C, which is added to the feed.

Conversely, wild salmon is higher in minerals, including potassium, zinc and iron.

There are two main types of polyunsaturated fats… Omega-3 and Omega-6 fatty acids.

These fatty acids have important roles to play in the human body.

We need both in the diet, otherwise we end up sick. That’s why they are termed the “essential” fatty acids (EFAs).

However… we need to get these fatty acids in a certain balance.

Most people today are eating too much Omega-6, and the delicate balance between these two types of fatty acids is heavily distorted towards Omega-6.

Many scientists have speculated that this can drive increased inflammation and may play a role in the pandemics of chronic diseases like heart disease and others.

Here’s where it gets interesting… farmed salmon has three times the total fat of wild salmon, but a large part of these fats are Omega-6 fatty acids.

For this reason, the Omega-6:Omega-3 ratio is about three times higher in farmed salmon, compared to wild.

However… I don’t really think this is a cause for concern. Even though farmed salmon contains Omega-6, the O6:O3 ratio is still excellent (at 1:3-4), it’s just less excellent than that in wild salmon, which is at 1:10.

Salmon, both farmed and wild, should lead to a massive improvement in Omega-3 intake for most people, and is often recommended for that purpose.

In a 4 week study of 19 volunteers, eating farmed Atlantic salmon twice per week increased DHA (an important Omega-3 fatty acid) levels in the blood by 50%

Bottom Line: Farmed salmon is much higher in Omega-6 fatty acids than wild salmon, but the amount is still too low to be a cause for concern.

Farmed Salmon is Much Higher in Contaminants

Fish tend to accumulate potentially harmful contaminants from their environment.

These contaminants are found in the water they swim in, as well as the foods they eat.

But farmed salmon has much higher concentrations of contaminants than wild salmon.

European farms have more contaminants than American farms, but species from Chile seem to have the least.

Some of these contaminants include polychlorinated biphenyls (PCBs), dioxins, and several chlorinated pesticides.

Arguably the most dangerous pollutant found in salmon is the PCBs, which are strongly associated with cancer and various other health problems.

One study investigated over 700 salmon samples from around the world and found that on average, the PCB concentrations in farmed salmon were eight times higher than in wild salmon.

Those contamination levels are deemed safe by the FDA but not by the Environmental Protection Agency (EPA).

Researchers suggest that if the EPA guidelines were applied to the farmed salmon they tested, recommendations would be to restrict salmon to no more than once per month.

While it is hard to say for sure, we know that risks are far fewer if you eat wild salmon instead of farmed.

Bottom Line: Farmed salmon contains much higher amounts of contaminants like PCBs, but the amount varies between fish from different regions.

Mercury and Other Trace Metals in Salmon

The current evidence for trace metals in salmon is conflicting.

However, one study found that wild salmon had levels three times higher.

Levels of arsenic have been found to be higher in farmed salmon, but levels of cobalt, copper, and cadmium higher in wild salmon.

In any case, trace metals in either variety of salmon are found in such low amounts that they do not appear to be a cause for concern.

Bottom Line: For the average person, trace metals in salmon do not appear to be found in harmful quantities. This goes for both farmed or wild salmon.