About one hundred times less toxic than chemotherapy, turmeric extract (curcumin) was found more effective at killing colorectal cancer stem cells from patients than a popular combination of conventional drugs.

Researchers from the United Kingdom have just made a major breakthrough in cancer research by demonstrating for the first time in patient-derived colorectal cell lines that a turmeric extract (curcumin) is not only an effective adjunct agent to enhance conventional chemotherapy, but that it may be even more effective on its own.

Published in Cancer Letters and titled, “Curcumin inhibits cancer stem cell phenotypes in ex vivo models of colorectal liver metastases, and is clinically safe and tolerable in combination with FOLFOX chemotherapy,” the study evaluated the so-called “diet-derived agent” curcumin – the primary polyphenol in turmeric – as a possible adjunct to enhance conventional treatment of colorectal cancer with chemotherapy. 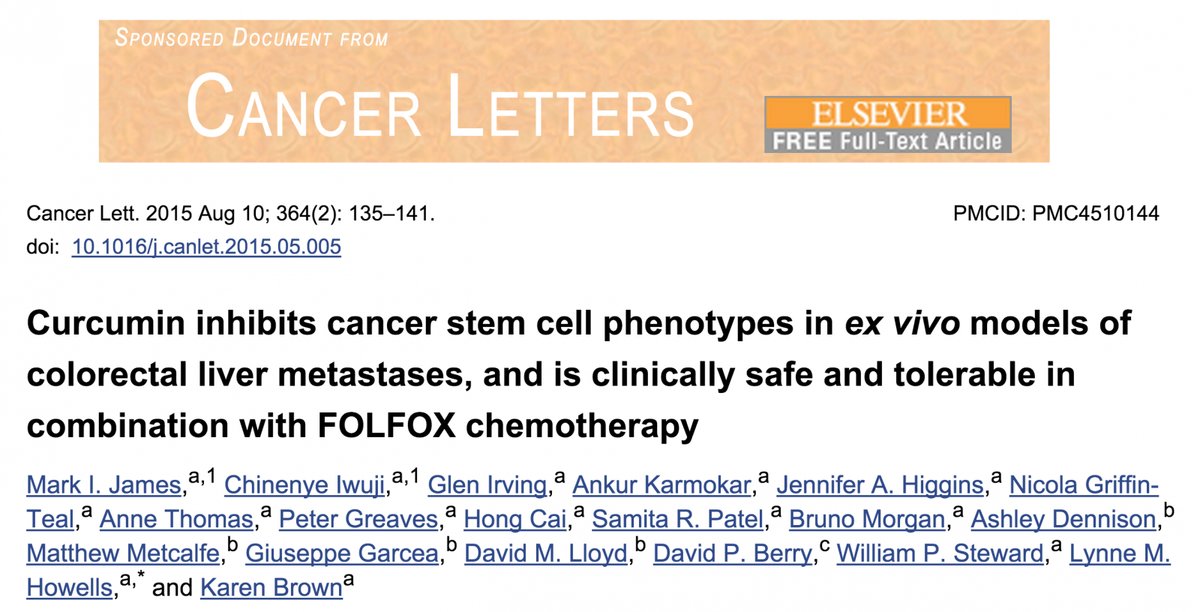 The primary role of cancer stem cells in contributing to cancer malignancy as well as resistance to conventional treatment is addressed in the study.

Whereas traditional cancer research methods focus on a treatment’s ability to reduce tumor volume (or the number of cells in a cancer cell culture), the cancer stem cell theory acknowledges that treatments have highly differential effects on the different cell types that comprise the tumor; namely, whereas the relatively benign daughter cells of a tumor may die when exposed to chemotherapy, the relatively chemotherapy-resistant cancer stem cell population (so-called “mother” cells) can actually increase in number as the tumor volume decreases, resulting in creating an albeit smaller but far more dangerous, treatment-resistant tumor.

The study design and results were summarized in the abstract below:

Here, we utilised patient-derived colorectal liver metastases (CRLM) to assess whether curcumin may provide added benefit over 5-fluorouracil (5-FU) and oxaliplatin (FOLFOX) in cancer stem cell (CSC) models. Combination of curcumin with FOLFOX chemotherapy was then assessed clinically in a phase I dose escalation study. Curcumin alone and in combination significantly reduced spheroid number in CRLM CSC models, and decreased the number of cells with high aldehyde dehydrogenase activity (ALDHhigh/CD133−). Addition of curcumin to oxaliplatin/5-FU enhanced anti-proliferative and pro-apoptotic effects in a proportion of patient-derived explants, whilst reducing expression of stem cell-associated markers ALDH and CD133. The phase I dose escalation study revealed curcumin to be a safe and tolerable adjunct to FOLFOX chemotherapy in patients with CRLM (n = 12) at doses up to 2 grams daily.”

As you can see above, the researchers discovered that curcumin is both a safe and effective adjunct in the treatment of colorectal cancer.

They noted the significance of these findings by pointing out that this was “the first time that curcumin may enhance oxaliplatin/5-FU-based chemotherapy in models derived directly from patients for whom the treatments are ultimately intended.” Specifically, the curcumin was able to inhibit what is known as “spheroid formation,” a 3-dimensional configuration of cells that indicates cancer stem cell driven cancer progression.

All these activities, taken together, indicate that curcumin is capable of targeting the stem cells at the heart of cancer malignancy.

But what is even more remarkable about the new study is that the researchers found curcumin outperformed the combination chemotherapy treatment (5-FU/oxaliplatin) in decreasing the cancer stem cell linked spheroid formation: “In addition, curcumin alone decreased spheroid number to a greater extent than the 5-FU/oxaliplatin treatments.”

This tremendously provocative finding is given only brief mention in the paper. When you look at the toxicological risks associated with chemotherapy agents like 5-FU, which have an oral LD50 in rats of only 230 milligrams/per kilogram, and compare it to curcumin, with an LD50 in rats of 12.2 grams/per kilogram, you can begin to appreciate the revolutionary implications of this research. [Note: An LD50 is the dose required to kill 50% of a test population of animals, i.e. the lethal dose 50%.]

Clearly, findings like these reveal the conventional chemotherapy paradigm for what it is: a toxicological nightmare offering only questionable efficacy relative to food-derived compounds. The authors of the study acknowledge that, “Curcumin may provide added benefit in subsets of patients when administered with FOLFOX, and is a well-tolerated chemotherapy adjunct.”

We concur that this is true, especially considering that curcumin has been found to reduce the side effects caused by conventional treatment.

But is that all? Shouldn’t curcumin be considered a first-line treatment itself? While the researchers do mention in their concluding remarks that, “Greater pro-apoptotic [inducing cancer suicide programs] and CSC [cancer stem cell] targeting efficacy was observed for curcumin than for oxaliplatin and 5-FU in a small patient subset, warranting further investigation to determine factors that influence response to curcumin,” this doesn’t seem strong enough.

We believe that given the great burden not only of cancer, but cancer treatment-related morbidity and mortality, it is ethically imperative that curcumin should be investigated as the active intervention in future clinical trials compared with conventional treatment.

We can no longer pretend that the reason why curcumin is not studied on par with patented chemical medicines is because of a lack of compelling research. This study proves it exists. The key is breaking through the mile high paywall (approximately 800 million dollars needed to fund the requisite clinical trials) that separates natural non-patented substances from FDA-drug approval.

In the meantime, a growing population is taking their health into their own hands, and finding ways to prevent and even treat cancer through dietary interventions and related natural approaches.

Read more: 14 Cancer-Causing Foods You Should NEVER Put In Your Mouth Again