JERUSALEM — Work has begun to save the holiest shrine in Christendom. It won’t be a simple patch-and-paint job.

This is the alpha and omega of restoration projects.

They are going to repair Christ’s tomb — with titanium bolts.

Over the next nine months, a team of Greek conservationists will restore the collapsing chapel built above and around the burial cave where the faithful believe that Jesus was buried and rose from the dead after the Crucifixion.

To fix the chapel, which is buckling under its own weight, the crew will have to enter a few square meters of the ruins of the first-century tomb.

It is called the Holy Rock. 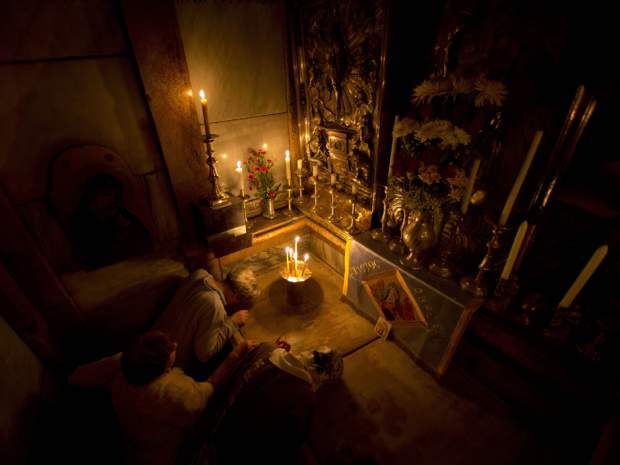 To get there, they will clean centuries of candle soot left from votive lamps; they will reset and anchor the imported marbles; and they will inject 21st-century stabilizing mortar into 12th-century masonry from the Crusader times.

And at the heart of the heart of the edifice, in the center of the Church of the Holy Sepulchre in the Old City of Jerusalem, they will lift the slab where millions of pilgrims have knelt and prayed, where the salt of tears and the wet of sweat have smoothed and worried the hardest stone.

And for the first time in more than 200 years, they will look inside.

The ruins of what is believed to be a rock-cut tomb is being breached because the chapel built above is falling apart.

Its repair is decades overdue. After years of squabbling among the Christian communities who occupy the site, work to restore the edifice began earlier this month.

The conservationists — whose jobs have included repairing the Acropolis in Athens — are not sure what they will find.

“This is the most alive place we have ever worked,” said Antonia Moropoulou, a leader of the team from the National Technical University of Athens.

The conservation team has already probed the chapel and tomb with ground-penetrating radar and laser scanners.

They have detected a fracture in the rock of the tomb, unknown until today. 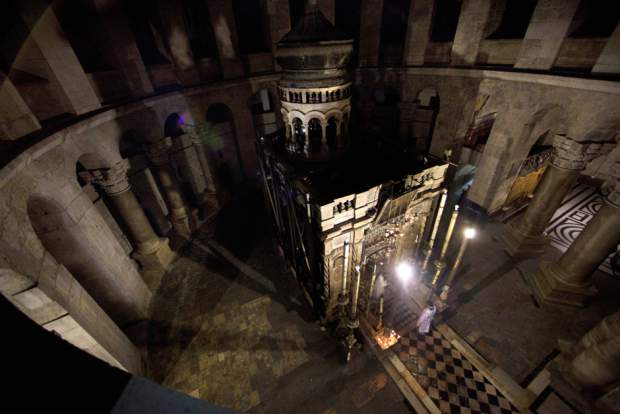 They believe that the crack is the result of stresses put upon it by the columns supporting a cupola above. Still. No modern scientist has ever looked inside.

What will they see?

Archaeology at the Church of the Holy Sepulchre has been limited, not only by protective clerics but also by centuries of tradition. The site is considered the most sublime in Christendom, a place of pilgrimage, faith, passion and mystery – not digging and probing.

Theophilos said he has reread the historical accounts of his predecessors who saw the ruins of the tomb when last exposed in 1810. 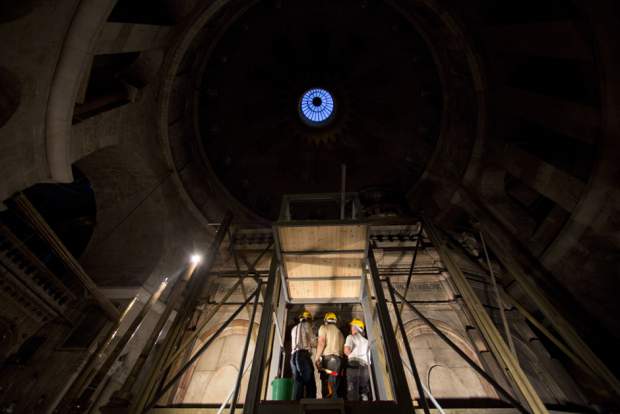 Here in the ancient alleys of Jerusalem, two centuries is not a long time. But in 1810, the last time clerics and workers exposed the Holy Rock, people didn’t know that germs caused disease and the science of archaeology did not exist.

Theophilos sat perched upon a velvet chair in the recesses of the church, surrounded by a dozen members of his retinue, including a pair of bodyguards each sporting red fezzes and long canes to push overeager congregants back.

The previous Crusader-era chapel was destroyed by a catastrophic fire in 1808, the patriarch said.

When the Greeks were rebuilding in 1809, Theophilos said, “Everybody was so excited to see part of what has remained of the original cave that served as the tomb of Christ.”

“Now? To be honest, we have the same feelings,” the leader of the Greek church said. “You cannot remain indifferent.”

He smiled but warned his guest: “This is not an archaeological monument. Those stones are not mere stones.”

The British archaeologist Martin Biddle, who studied the site in the 1990s, speculated that there could be ancient graffiti left by pilgrims somewhere around the Holy Rock or beneath the floor under the rotunda, perhaps scribbles of “He is risen!”

Or maybe the small, scratched crosses left in the caves of Christians in the first centuries after his death. 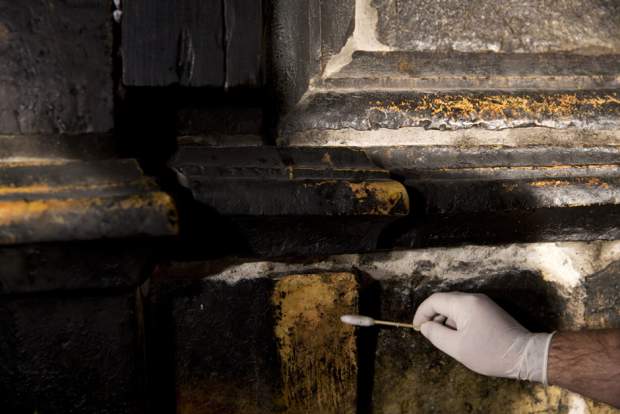 Whatever evidence exists, the conservationists won’t know until they get there — and even then, will it prove definitely that this was the tomb of Jesus?

The Greek team has promised to keep the church open to visitors and pilgrims throughout the restoration, meaning they will be working in the deep of the night, the site lit by their own portable generators and a hundred vigil lamps.

“This is a very challenging environment. Very profound. Yet very exciting,” said Moropoulou, a leader of the Greek team.

Moropoulou said she was both an engineer and a believer.

“This is a serious undertaking,” she said. “We know very well where we are, and we know what we are doing.”

The Church of the Holy Sepulchre in Jerusalem is one of the most popular religious sites in the world.

The cavernous basilica, filled with obscure niches, secret Crusader tombs, and hidden chapels and golden icons, marks the site where Catholic and Eastern Orthodox faiths believe that Jesus died, was buried and rose.

Every year on Easter Saturday, thousands of Eastern Orthodox pack into the Sepulchre to see the miracle of the Holy Fire, when a bundle of candles is lit by the tomb and passed, hand to hand, to reaffirm for believers the resurrection of Christ and the promise of eternal life.

Religious scholars say the earliest followers of the new Jesus movement may have been praying here in A.D. 66. There is abundant evidence that Christian pilgrims have been making their way here since at least the 4th century.

The traditional tomb is now underneath a towering rotunda, cocooned in a small chapel called the Holy Edicule, which according to tradition shelters the remains of the 1st-century burial cave the Bible says belonged to a prominent Jew — and a secret disciple of Jesus — who offered it to Christ.

Today, the site thrums with piety, but history knows it is soaked in blood. There have been at least four Christian chapels erected over the site. The first was by Emperor Constantine in the 4th century, who swept aside a pagan temple Hadrian built to the goddess Aphrodite — perhaps a move by Rome to deny early Christians a place of pilgrimage. The Holy Sepulchre was saved by the Muslim conqueror Omar in 638; destroyed by the Egyptian Caliph al Hakim in 1009; rebuilt by the Crusaders who themselves slaughtered half the city; protected again by the Muslim conqueror Saladin and laid waste again by the fearsome Khwarismian Turks, whose horsemen rode into the church and lopped off the heads of praying monks.

The last chapel was built by the Greeks, after a tremendous fire, in 1810. 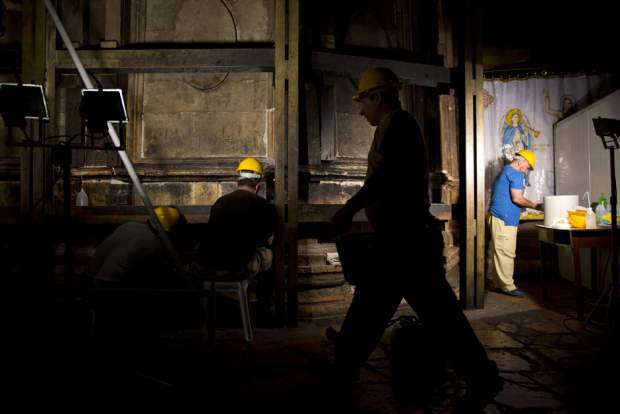 Today, a cage of iron girders, erected as a temporary emergency fix by the British governor in 1947, no longer can sustain the bulging edifice.

The Rev. Jerome Murphy-O’Connor, in his respected Oxford archaeological guide to the Holy Land, saw the Church of the Holy Sepulchre as a very human collision of the sacred and profane.

“One looks for luminous light, but it is dark and cramped,” he wrote. “One hopes for peace, but the ear is assailed by a cacophony of warring chants.”

The priest-archaeologist asked: “Is this the place where Christ died and was buried? Yes, very probably.”

It has taken years to get the Christian communities that worship at the Holy Sepulchre to agree to the restoration project.

The religious orders who have rights at the Holy Sepulchre – Greek Orthodox, Latin Catholics and Armenian Orthodox, alongside Syrians, Copts and Ethiopians – are notorious squabblers, each fiercely asserting their rights under an Ottoman-era “status quo” agreement to worship at this altar at that hour on this or that holy day.

It took a poke from the pope and a nod from the head of the Eastern Orthodox Church to get the project rolling – plus a commitment by King Abdullah II of Jordan, a Muslim who has rights as a protector of holy sites in Jerusalem, to foot most of the $3.4 million bill.

“The work will finally begin, and it is past time,” said the Rev. Peter Vasko, president of the Franciscan Foundation for the Holy Land.

“The place is falling apart,” he said.

Vasko recalled the first time he prayed over the covered tomb as a young priest and trembled with the realization, “I am not worthy.”

“This is the real thing,” Vasko said. “It is not a holy place. It is THE holy place.”

When the restoration is complete, the British iron girders will be gone, the columns straightened, the tomb bolted, and the limestone and marble scrubbed clean and glowing again in colors pink, yellow, white, black and green.

Asked how long the repairs should last, one of the Greek conservationists guessed “a thousand years.”

Then, shrugging, “Maybe forever,” he said.