Recently, scientists scanned the brains of volunteers who’d taken LSD — and the results were nothing less than amazing.

Instead of taking doses of the drug orally as is ordinarily done, the volunteers agreed to have 75 micrograms of LSD injected. The resulting images, as the Guardian described, “have given researchers an unprecedented insight into the neural basis for effects produced by one of the most powerful drugs ever created.”

As a result of the groundbreaking study, researchers were able to map the incredible changes in the brain and better understand the sense of oneness often anecdotally reported by people who take LSD.

Scans revealed the profound changes in the brain when someone hallucinates under the influence of psychedelics — which, as researchers were surprised to discover, don’t only occur in the visual cortex. “Under the drug,” explained the Guardian, “regions [of the brain] once separated spoke to one another.”

Interestingly, the feeling of oneness the volunteer trippers reported — known as “ego dissolution” — was also evidenced in separation in other areas of the brain which are normally connected.

“This is to neuroscience what the Higgs boson was to particle physics,” explained David Nutt, senior researcher in the study and professor of neuropsychopharmacology at Imperial College London. “We didn’t know how these profound effects were produced. It was too difficult to do. Scientists were either scared or couldn’t be bothered to overcome the enormous hurdles to get this done.”

Lysergic acid diethylamide, LSD, which was first synthesized in 1938, has been vilified by governments due to the insidious war on drugs — making research of its potential therapeutic qualities difficult, if not impossible. To fund this study, Nutt and his colleague, Robin Carhart-Harris, turned to crowdfunding and The Beckley Foundation, which researches various psychoactive substances and seeks to “reform global drug policy.”

“We saw many more areas of the brain than normal were contributing to visual processing under LSD, even though volunteers’ eyes were closed,” Carhart-Harris said. Of that oneness and the loss of individual identity users reported, he explained, “This experience is sometimes framed in a religious or spiritual way, and seems to be associated with improvements in wellbeing after the drug’s effects have subsided.”

Networks in the brain related to vision, hearing, movement, and attention became more connected than normal while volunteers were tripping, which Carhart-Harris described as a more “unified brain.” But the parahippocampus and retrosplenial cortex, in contrast, lost connectivity. 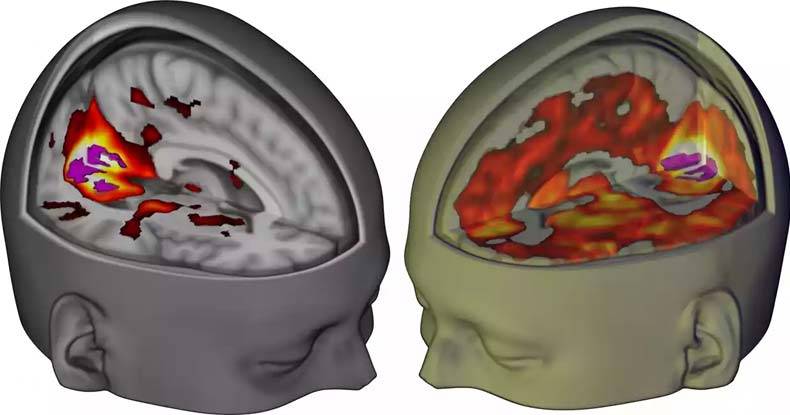 This study follows several others which have also found enormous therapeutic benefits possible with psychedelics. However, the persistent negative stigma surrounding even cannabis makes changes to drug policy for psychedelics — regardless of how many people could be helped — doubtful at best.