The dark side of the tech industry.

As the American public continues to depend more on digital technology to run society, the US tech industry is booming. New gadgets are flooding the market each year, and the top tech companies — Apple, Microsoft, Google, IBM, HP, and Cisco, among others — are raking in record profits. But our addiction to the latest technology is simultaneously killing our atmosphere, our water, indigenous populations, and in the long run, our economy. These 12 photos illustrate how the US tech boom is affecting the rest of the world.

TECH COMPANIES DEPEND ON CHILD LABOR FOR THEIR RAW MATERIALS 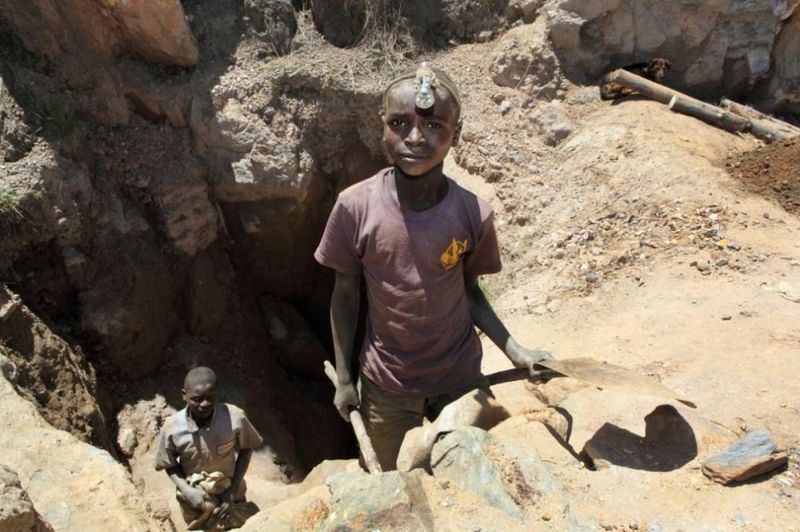 In the war-torn Democratic Republic of Congo (DRC), child labor has intensified in the last decade due to increased demand for minerals like cobalt, copper, and coltan (short for columbite-tantalite). Currently, 16.9 percent of the children between ages 5 and 14 work in the Congolese mining industry. And despite Congolese mining laws prohibiting the nation’s armed forces from running the mines, the United Nations estimates that the Congolese army controls approximately 50 percent of the DRC’s 200 mines. The UN’s International Labor Organization called mining one of the worst forms of child labor due to the numerous health risks inherent in the industry.

AT LEAST 40,000 CHILDREN ARE FORCED TO MINE THE MINERALS IN OUR SMARTPHONES AND LAPTOPS 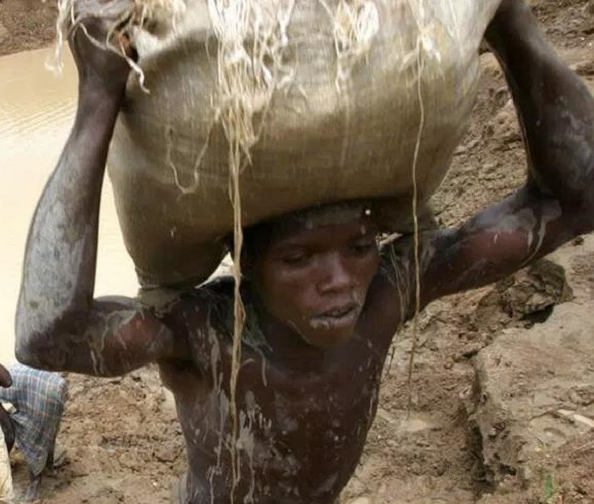 To get around Congo’s mining laws, the Congolese army operates under “artisanal mining” guidelines, allowing them to conscript workers to labor in extremely hazardous conditions. According to a 2010 study by BMS World Mission, of the 100,000 mine workers in the DRC, 40 percent are children under age 18. Children are often conscripted by the army to work in the mines, and are paid just $1 to $5 a day. Of the children who work in the mines, 66 percent are unable to finish school, and 77 percent of those children eat just one meal a day. 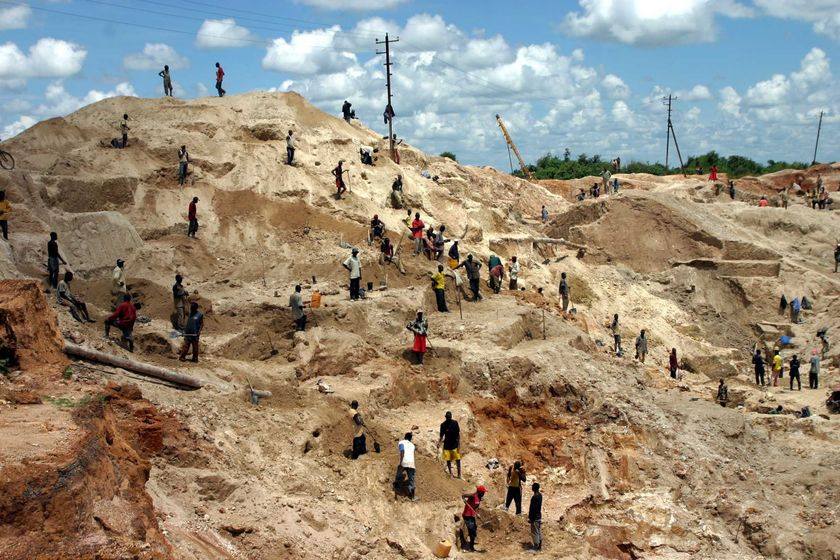 The DRC holds roughly 80 percent of the world’s coltan. Along with the Congolese national army, militias from Uganda, Rwanda, and Burundi control most of the coltan mining in the DRC. One group is the Democratic Forces for the Liberation of Rwanda, which was behind the slaughter of 800,000 Rwandans in 1994. Even though Rwanda itself contains no coltan, Rwanda’s coltan exports went from 50 tons in 1995 to 250 tons in 1998. The United Nations reported in 2001 that the American companies purchasing the exploited minerals serve as “the engine of the conflict in the DRC.” 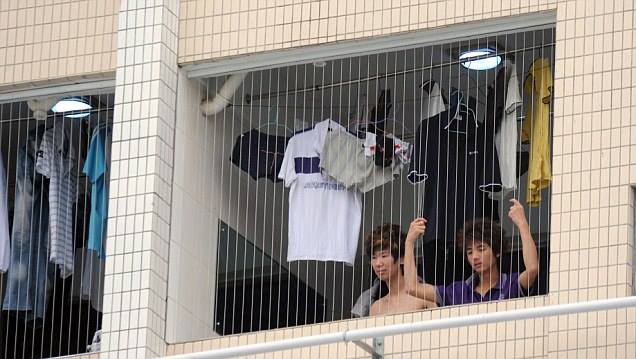 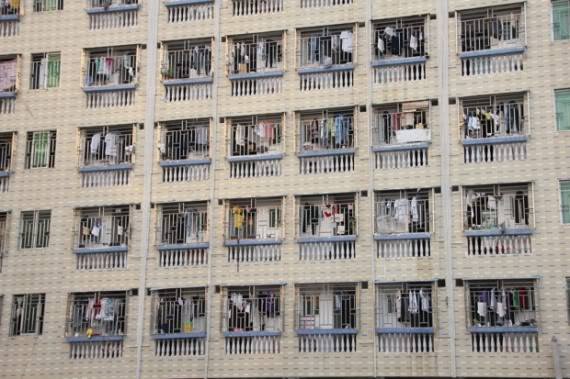 Contract manufacturer Foxconn is China’s largest private sector employer and the chief manufacturer of Apple’s iPhones and iPads. It also makes electronics for Dell, Motorola, Nintendo, Nokia, and Sony. Working conditions are apparently so bad at Foxconn that the tech manufacturer installed suicide nets at its plants after a rash of suicides in 2010 at Foxconn’s Shenzhen plant that resulted in 14 worker deaths. Foxconn also put barriers on windows of the factory dormitories where its 300,000 to 400,000 workers live, to prevent workers jumping to their deaths.

However, Foxconn workers continue to attempt suicide every year — Between 2010 and 2013, 7 more workers committed suicide. And another Foxconn worker jumped to his death as recently as August. In 2011, workers at Foxconn’s Chengdu plant were forced to sign a contract that forbids them from committing suicide. 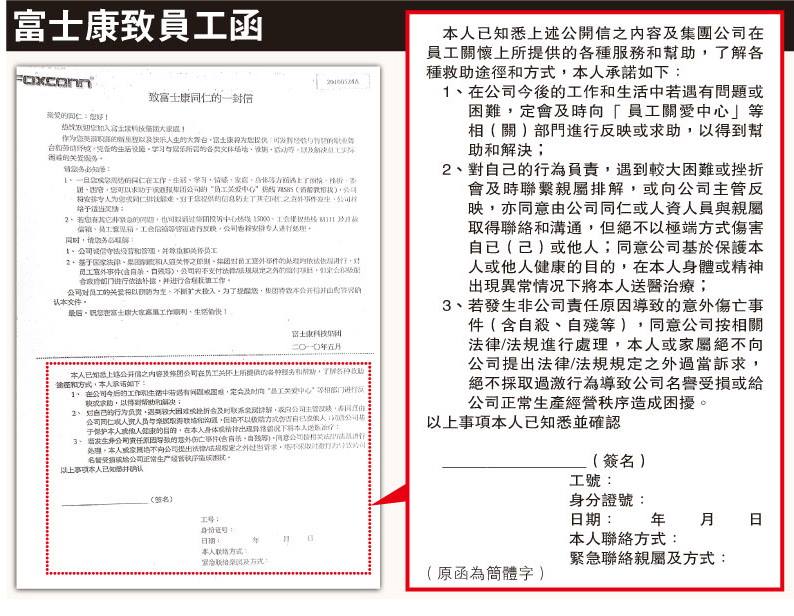 In response to the suicides, Foxconn has held rallies and announced a pay increase of $293 a month (roughly an additional $9.70 per day) in an attempt to boost workers morale. But the company still hasn’t removed suicide nets from its buildings. And judging by this photo of a Foxconn rally, worker morale hasn’t improved much. 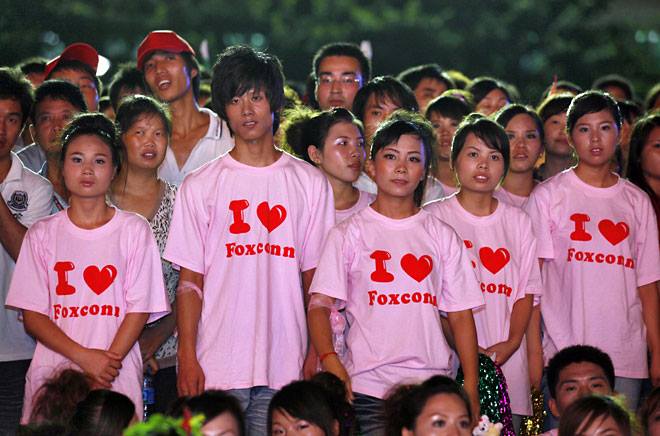 FOXCONN WORKERS MAKE $17 A DAY. FOXCONN’S CEO IS WORTH AT LEAST $5.9 BILLION 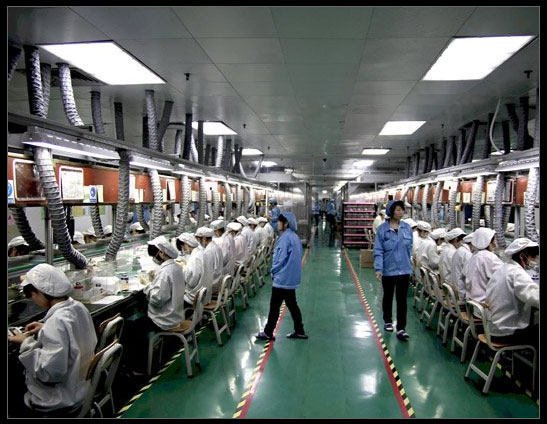 The pay and working conditions at Foxconn are so unbearable that 5 percent of its workforce — approximately 24,000 people — quits every month. According to the New York Times, the average Foxconn worker makes $17 a day, working 70 hour weeks. Meanwhile, Foxconn CEO Terry Gou has a net worth of $5.9 billion. That means the average Foxconn employee would have to work 347 million days, or 951,000 years, to have as much money as its top executive. And if that isn’t bad enough, Foxconn workers are fined just for talking at work, and security guards patrol the assembly lines to listen for workers breaking the no-talking rule.

“Hundreds of people work in the workshops but they are not allowed to talk to each other,” Chinese government investigator Zhu Guangbing told The Telegraph. “If you talk, you get a black mark in your record and you get shouted at by your manager. You can also be fined.” 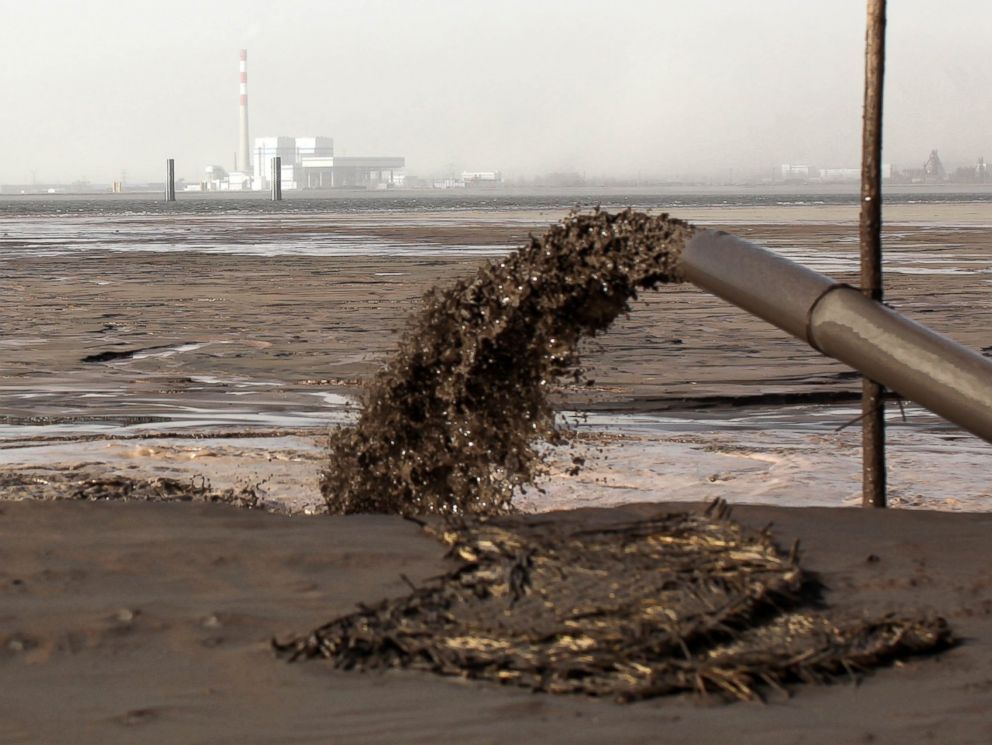 Roughly 95 percent of the “rare earth minerals” used in smartphones and laptops gets produced in Northern China. But Mongolia holds 70 percent of the world’s reserves of those minerals. The waste from those mining operations gush out of pipes in Baotou — a region of Mongolia bordering Northern China –where some toxic lakes span more than 5 miles in diameter. Here’s a GIF image of multiple pipes ejecting sludge from a tech mining site into an artificial lake. 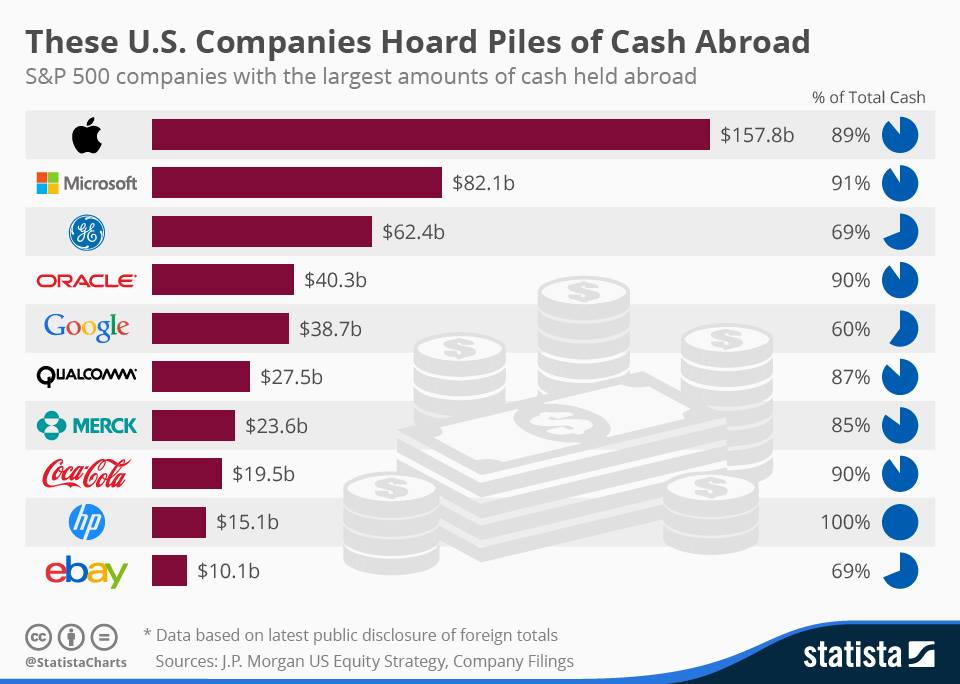 Collectively, the 5 biggest tech companies — Apple, Microsoft, Google, Oracle, and Cisco — have over $430 billion in overseas cash. Apple alone has $158 billion stashed overseas. If brought back to the US and taxed at a 35 percent rate, that $430 billion would provide $150.5 billion in revenue. That could create 600,000 public sector jobs for 5 years at $50,000 a year per job.

And as the below chart illustrates, the tech industry’s median tax rates are some of the lowest out of all industries. New York University professor Aswath Damodaran studied the data of over 7,000 publicly-traded companies, and discovered that while the retail automotive sector pays a median effective income tax rate of 32.7 percent, the computer software/services sector and the internet sector pay just a 10.1 percent and 5.9 percent rate, respectively. 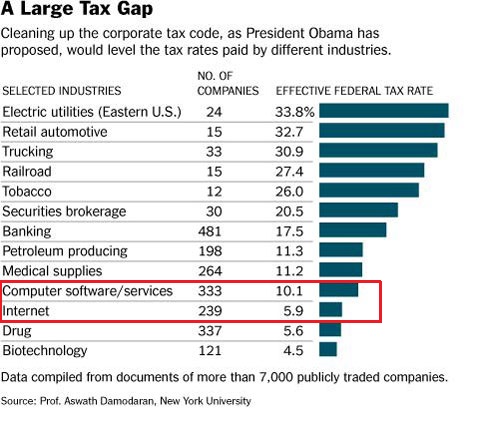 TECH WORKERS ARE GENTRIFYING SAN FRANCISCO SO MUCH, THEIR BUS DRIVERS HAVE TO SLEEP IN CARS 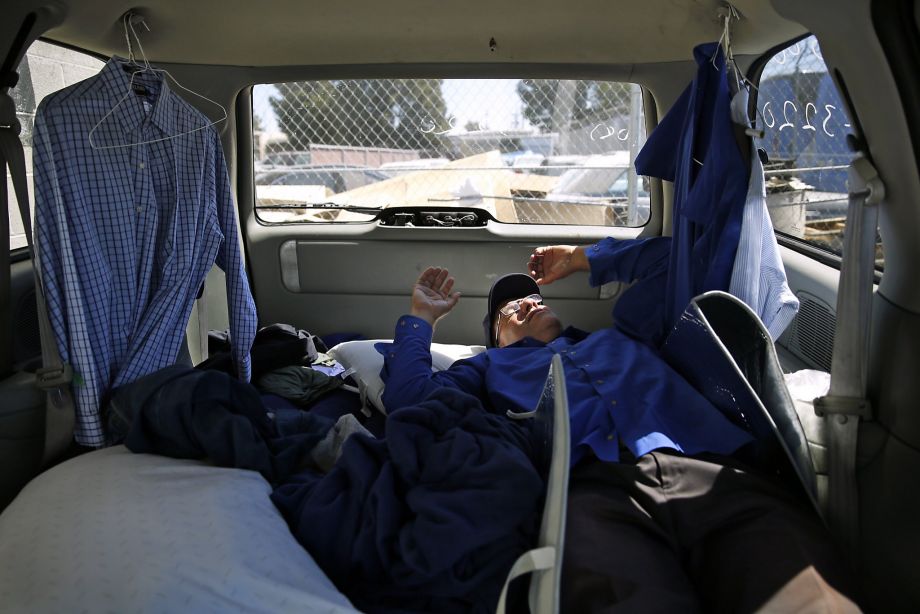 While the tech industry is booming, a huge influx of well-to-do employees of Google, Twitter, and Facebook are moving into San Francisco and Oakland en masse. Silicon Valley tech companies even shuttle workers from their downtown apartments to their workplaces using private bus services. According to the San Francisco Chronicle, an average one-bedroom apartment now costs $2,186 in San Jose, $2,469 in Oakland, and $3,361 in San Francisco. Needless to say, these bus drivers can’t afford to rent an apartment in the cities they serve, and sleep in their cars instead.

Technology is an industry likely to continue growing and expanding over the next several decades. Unless customers start demanding better treatment of workers, the environment, and the communities they inhabit, the tech industry’s unsavory business practices are likely to continue.

Originally written by C. Robert Gibson and published on www.usuncut.com