SCIENTISTS say they are still learning from the world’s oldest corpse 25 years after discovering it in the Alps.

At an event in Bolzano, Italy, beginning today scientists will reveal more about Otzi and how he died.

Nicknamed Otzi because he was discovered in the Otzal Alps on the Austrian-Italian border in September 1991 police originally thought that he was a victim of crime and launched a criminal investigation.

Initially the body was placed in a coffin at the local police station, before it was later revealed that Otzi had died around 3,350-3,100 BC – before Stonehenge and the Pyramids were built.

New technologies have allowed scientists to learn more about that era.

Albert Zink, the Director of EURAC Institute for Mummies and the in Iceman in Bolzano, claims that studying the bacteria in Otzi’s stomach could greatly assist with advances in modern medicine.

The mummy contained a bacteria in his stomach H.pylori, which is present in 50 per cent of people’s guts and could lead to cancer. 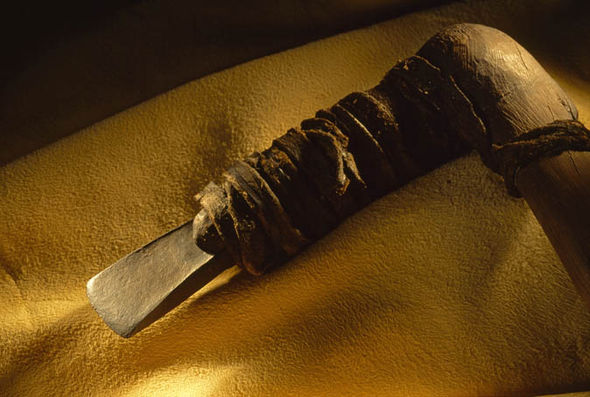 A primitive copper axe found with the iceman

“Maybe this was a positive bacteria that helped with the digestion of raw meat and later turned into a pathogen,” Mr Zink said.

He claims that Otzi has put Bolzano “on the map” and revealed how global warming may lead to more discoveries of this nature.

The director of the museum in Bolzano where the mummy is on display, Angelika Fleckinger, said the discovery is “outstanding”.

“The iceman is without doubt one of the most outstanding mummy discoveries in the history of mankind.

“It’s a unique window into the prehistoric era, and gives us an incredible amount of information.” 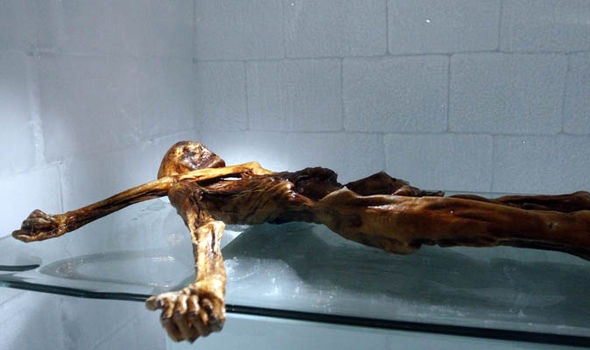 Otzi is thought to have died aged 46, without an ounce of fat on his body, a full beard and 61 tattoos.

Research suggest he lived in the Late Neolithic or Copper Age.

In 2001, an arrowhead was discovered in his shoulder revealing that he may have been shot from behind. 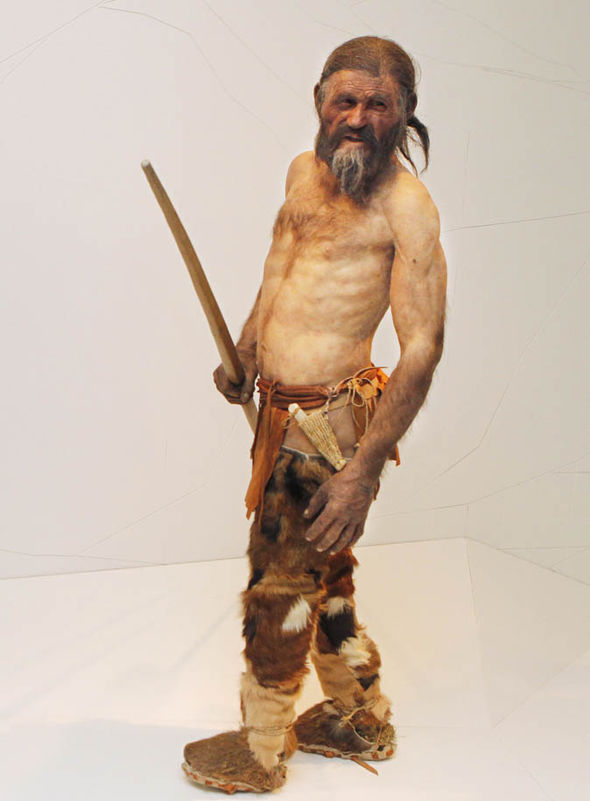 An artists impression of what ‘Otzi’ looked like before he died

He would have died in minutes and it is thought he may have been finished off by being hit on the head.

Experiments on his stomach revealed he has a meal including barbecued ibex (a species of goat) around 12 hours before he died.

The 30 different types of pollen found in his intestines and the isotopic composition of his tooth enamel suggests that he likely lived just south of the Alps.

After nearly five and half millennia without a peep, Ötzi has finally broken his silence, thanks to a team of researchers who constructed a model of his vocal tract using CT scans.

Inspired by Express.co and IFL science