The time is 360 BC, the dawn of Western civilization. Athens, the cradle of democracy, is the epicenter of the ancient world. In his dialogues of Timaeus and Critias, Plato introduces a tale of an advanced prehistoric civilization, which since has captivated the imagination of every generation that followed. This was the story of Atlantis, an idyllic island paradise of skillful navigators who often crossed the Atlantic to explore. Atlantis, according to Plato, was ultimately lost to the sea. Its memory, though, was not soon forgotten.

For two millennia, people unsuccessfully kept on searching for the legendary island, making Atlantis one of the most lasting and fascinating stories of all time! What about those, however, who over time claim to have found the lost island? The truth is, no one until now was able to introduce a site that perfectly matched Plato’s description. Instead, we have theories upon theories on the whereabouts of Atlantis. Why though? If everyone utilizes the same textbook, why the apparent confusion? Can this be a case of gross misinterpretation among researchers, or did early translators fail to properly capture and relay Plato’s account? And, what about the chronological conflict that exists in Plato’s account?

Let’s take the original Santorini hypothesis, for example. Unquestionably, the island of Santorini, its volcanic eruption and the advanced Minoan civilization, was the best we had on Atlantis until recently. This was never a flawless hypothesis, though. Always a big problem with that theory was the fact that Plato’s given chronology of 9600 BC had to be discarded (as Athens and most story details did not belong in that period). There is another bigger problem with that theory, though. While Santorini itself undeniably matches the site where the crown city of Atlantis once stood (talking about the concentric rings of earth and water) the problem is, Santorini alone never matched Plato’s entire description. The primary island of Atlantis, one Plato said was to be 9 kilometers away, is missing from the particular setting of 1600 BC. These major flaws allowed for critics to raise doubts on that hypothesis, and to continue to question the validity of Plato’s story.

Of course, serious research on Atlantis was never simple. Science fiction authors, movies and other creative works of popular culture, eventually capitalized on the story’s popularity, and contrary to Plato’s account, over time they turned Atlantis into an ultra-modern society with flying machines and technology far beyond our own.

Nonetheless, eventually every search comes to an end. Recently, a four year study that included a thorough analysis of Plato’s work established that serious errors by early translators allowed for the mixed messages in the translated document.

The recent study not only decisively placed Atlantis in the Mediterranean Sea, but, it concluded with the discovery and identification of a submerged prehistoric island that in every way matches Plato’s Atlantis. While in the past finding Atlantis was thought to be more difficult than winning the lottery, now there is a tangible site where all the physical characteristics of the given description match. The topography, the given chronology, the volcanic geology, the flora and fauna in that period, the island’s destruction by a great flood, the presence of an unknown prehistoric civilization in the area, and DNA evidence all point to a genuine discovery.

More specifically, the study shows that around 9600 BC, when according to Plato Atlantis was above water, the modern Cyclades Islands were connected by the Cyclades Plateau, a flat terrain (now 400 feet below sea level,) that formed the body of a huge island. When this prehistoric island is compared to Plato’s Atlantis, it immediately becomes evident that this must have been the land Plato was talking about. Its northern region was comprised of mountains that reached the shores. Below the mountainous region there was an oblong valley measuring 555 Km 2. Below the oblong valley there was a smaller valley, 2/3 the size of the oblong valley that measured 370 Km 2. This was the primary island. Nine kilometers away from the primary island, and precisely as Plato depicted, lies the island of Santorini, a circular island with a flooded core and a small island in its center (Santorini, an island within an island setting, a sea volcano with a collapsed center, prior to the volcanic eruption of 1600 BC had a single opening on its outer ring that allowed ships to enter its watery caldera). 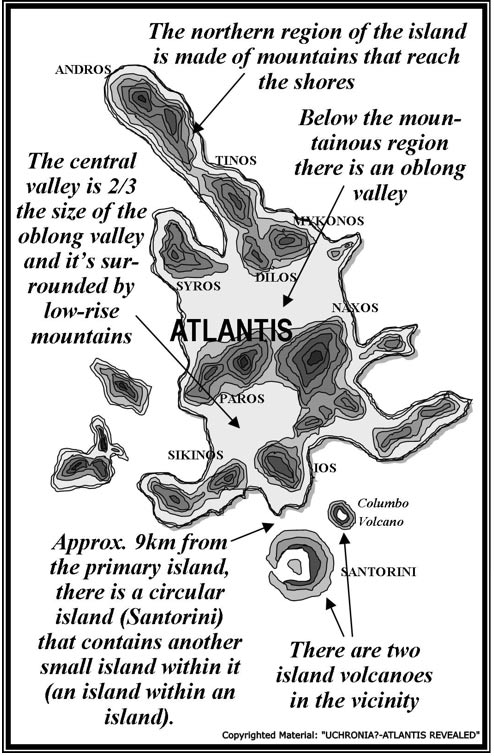 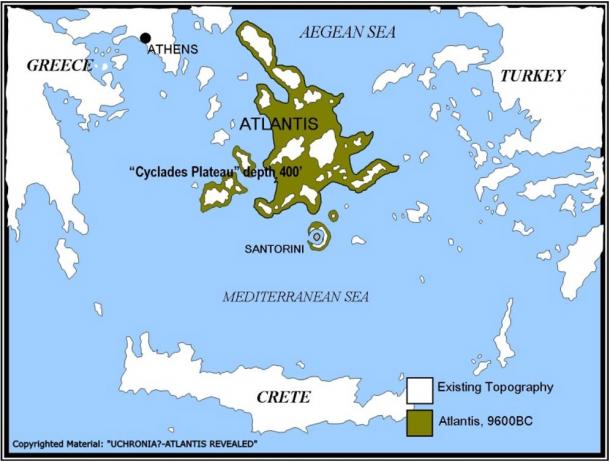 The consequence in finding Atlantis at around 9600 BC leaves no doubt that Plato based his story on a real setting and a prehistoric civilization known to ancient Greeks, which in order to successfully communicate some of his philosophical ideas (divine vs. human, ideal societies vs. corrupt,) he filled with familiar matter from later times, including details from the Minoan era of which he was more familiar with. The existence of a matching site at around 9600 BC, in essence, proves that Plato did exactly what Homer did with Troy 400 years before him. (Homer’s Iliad was an entirely fictional story that revolved around a real setting and a historical incident that took place 600 years before Homer himself.) 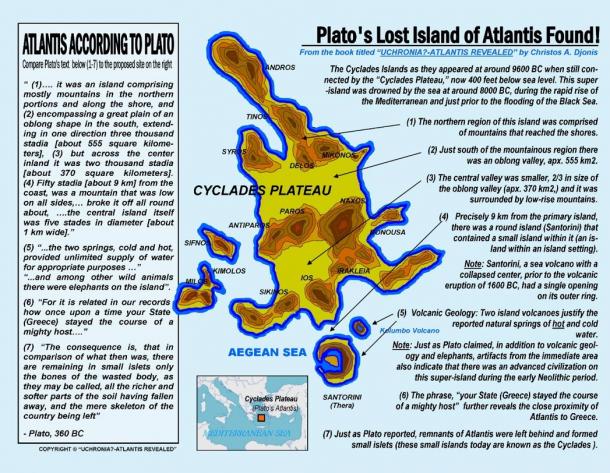 The super-island of the Cyclades Plateau (Plato’s Atlantis) was drowned by the sea at around 8000 BC, during the rapid rise of the Mediterranean and just prior to the flooding of the Black Sea (see UNESCO study, 2009.) Incidentally, around this time, Lake Agassiz, a gigantic glacial lake in North America, also burst open and began to drain into the Atlantic. It is worth noting that Lake Agassiz covered an area larger than all the Great Lakes combined (440,000 Km 2) and at times, it contained more fresh water than all the lakes in the world today. The total fresh water outflow from this lake alone was so immense, scientists believe it raised the oceans worldwide by as much as nine feet and further produced the 8.2 kilo-year event that followed, a mini ice age that lasted 400 years! This global cataclysm at the end of the last Ice Age, which ultimately raised sea levels by 400 feet, not only erased our early history, but this could also be the event we all inadvertently refer to as the “Great Flood.”

As for the island/continent across from the Pillars of Hercules, one larger than Libya and Asia combined, the latest study demonstrates how Plato’s reference of the American continent got misconstrued into that of Atlantis. The mention of the continent across the Atlantic, “one that encompassed that veritable ocean,” was Plato’s poetic attempt to demonstrate Atlantis’s incredible naval capability and its capacity to cross the ocean via island hopping (through Scotland, Orkney Islands, Faroe Islands, Iceland and Greenland.) Several clues and archaeological evidence actually confirm that the ancient Greeks were aware of the American continent in order for Plato to include it in his story. 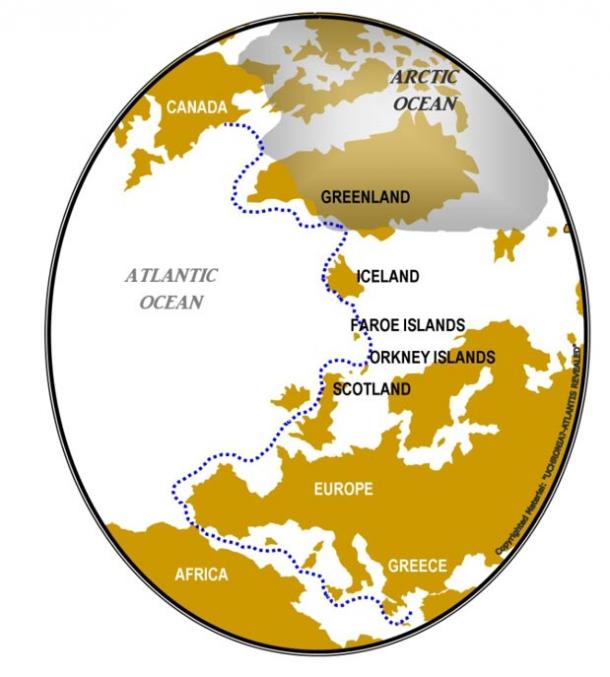 The implications of locating Atlantis in the Mediterranean go beyond the discovery itself. This find not only substantiates Plato’s claim of prehistoric transatlantic crossings, but may finally help explain how the Mediterranean haplogroup X got to North America 10,000 to 12,000 years ago. 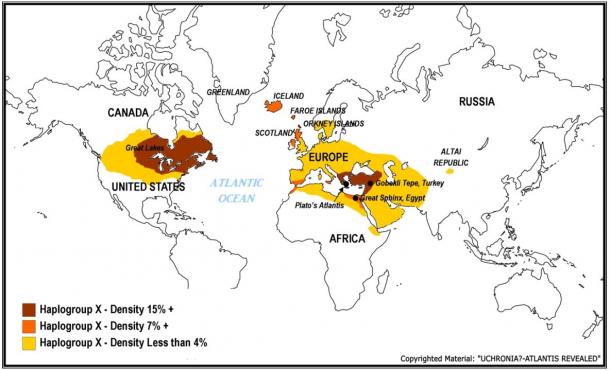 Finally, a 10,000 year old Mediterranean civilization, may help explain more archaeological oddities in this region. Recent erosion and seismic tests at the Giza Plateau, indicated that the Great Sphinx may be much older structure than previously thought, and along with the site of Gobekli Tepe in Turkey, both seem to coincide with Plato’s story of Atlantis. Is it possible that Gobekli Tepe and the monument of The Great Sphinx could be remnants of the same advanced civilization Plato referenced in his story, one that was aggressively advancing against its neighbors in Africa and the Middle East, or do those belong to another culture? And what about the advanced proto-Euphratean people who descended upon the Mesopotamia around 7000 BC, from a region “unknown.” Could these enigmatic people be the refugees of the same culture who fled the Mediterranean basin and moved eastwards to escape the inundation? Undoubtedly, they could have brought with them the story of the great flood as well as the skills and technology to incite yet another great civilization, like that of ancient Sumer (just as the survivors around the Cyclades and neighboring islands may have ultimately contributed to the rise of the Minoans).

Originally written By Christos A. Djonis and published on Ancient Origins