A massive crack in the Antarctic ice shelf could be the first sign that the predictions of Edgar Cayce are starting to come true.

You can’t deny climate change unless you’re a fan of ignoring the thawing elephant in the room holding a ticking time bomb in its trunk. For decades, scientists have known about what’s coming, their voices silenced and drowned out by money and the true rulers of this world. But if we’re to give credence to the predictions of Edgar Cayce, the signs might have come even earlier.

At the beginning of the last century, American mystic Edgar Cayce began using his clairvoyant powers to uncover details about our planet’s hidden past. But the controversial personality also claimed to be able to peer int the future and what he saw did not bode well for mankind. He claimed that in a relatively short period of time, our world will change, ultimately ending up as a place beyond recognition. He wrote:

“The earth will be broken up in many places. The early portion will see a change in the physical aspect of the west coast of America. There will appear open waters in the northern portions of Greenland.

There will be seen new lands of the Caribbean Sea. South America will be shaken from the uppermost portion to the end; and in the Antarctic off Tierra del Fuego there will be land, and a strait with rushing waters.” 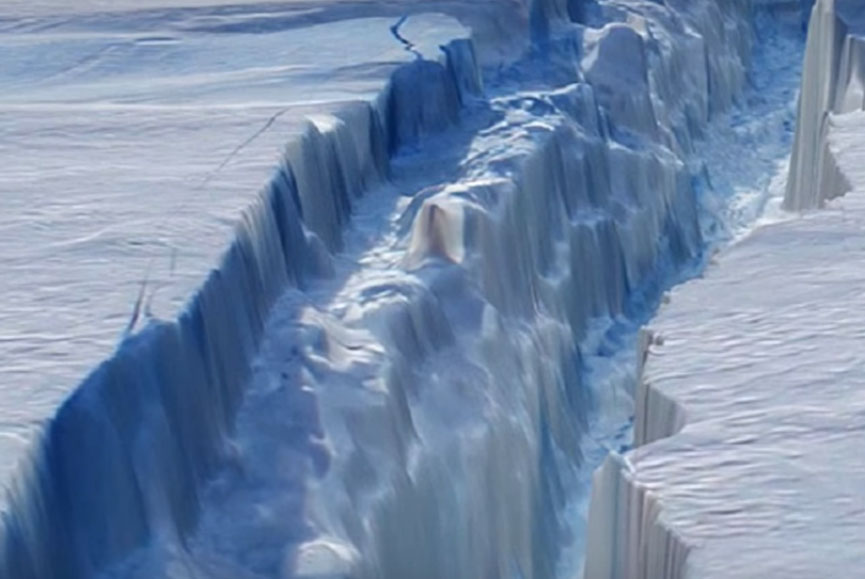 Is this giant crack proof of the predictions of Edgar Cayce? Are they finally coming true?

Recently, NASA spotted a crack in the frozen continent.

The fracture was photographed on November 10 as part of Operation IceBridge, an airborne survey of Antarctic ice. The survey has been tracking the change in the South Pole due to the devastating effects of global warming.

Related: Stunning! Mysterious Pyramid Discovered In Antarctica Could Rewrite History As We Know It!

Located in the Larsen C region, the crevasse now measures 70 miles in length and is slowly extending. The fragmentation of the Antarctic is obvious in satellite imagery and data shows large chunks of ice constantly breaking up and drifting away. If this new crack will reach the ocean and separate Larsen C from the rest of the ice shelf, a new iceberg with a surface area of over 6,500 square miles will have formed. When this melts, global ocean levels could see a raise of 0.8 to 2 meters (2.6-6.5 feet).

When there is first the breaking up of some conditions in the South Sea and those as apparent as the sinking or rising of that which is almost opposite it, or in the Mediterranean, and the Aetna area, then we may know it has begun. – Edgar Cayce

This is yet another sign that the antarctic ice is melting and sea levels will undoubtedly rise, wreaking havoc on coastal regions. Weather patterns are going to get more unpredictable and freaky. Considering the current state our world is in, just imagine what global hurricanes and severe storms would do…

Watch: Russians Found Proof of Anunnaki Civilization In Antarctica. Get Ready For Disclosure!