Farmers in India have been using Coca-Cola and Pepsi as a cheaper alternative to pesticides. So, besides that they are poisonous for our metabolisms, they also have another function in other parts of the world. Interesting, huh?

CSE (Center for Science and Environment), which is one of the leading voluntary agencies in India said that soft drinks like Coca-Cola and Pepsi contain unacceptably high levels of pesticide residues so numerous farmers used the beverages to eliminate pests because of low costs compared to conventional pesticides.

Coca-Cola has been tested in many cleaning scenarios and it can be compared to brands to clean oil stains, strip paint, and tile grout. The CSE, in 2003 analyzed samples from 12 soft-drink manufacturers and discovered that all of them contain residues of 4 toxic pesticides and insecticides.

The names of them are chlorpyrifos, malathion, DDT, and lindane. 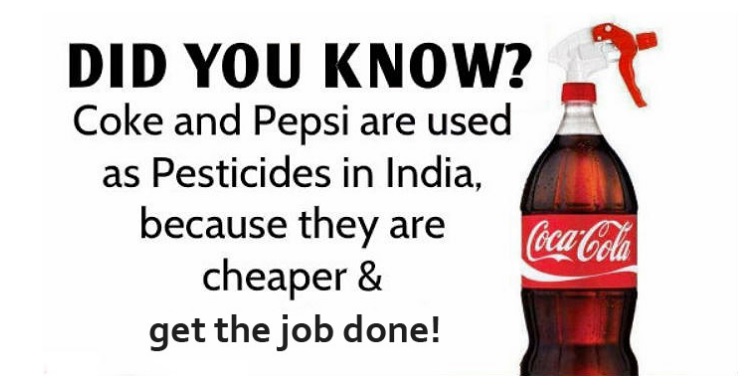 Moreover, they added that each sample was toxic enough to cause nervous system damage, cancer, damage to the reproductive system, birth defects, and damage to the immune system.

Coca-Cola and Pepsi strongly disagree that they products can be used as pesticides. However, farmers in these parts of the world successfully use them to protect their rice plantations against pests.

On the other site, agricultural specialists claim that farmers mistake that these drinks have the same function as the pesticides. They say that these products are sugar syrups and if they are sprayed on the crops they can attract red ants that feed on the larva of insects.

It is not a Coca-Cola’s legendary secret ingredient that upsets the bugs but the farmers swear by Thumbs Up, Pepsi, and other local soft-drinks. The main ingredients are sugar and water while some manufacturers add phosphoric and citric acids to give an extra taste.

Also, they claim that using the sugar syrup for pests isn’t a new practice as the farmers used sugary solutions, traditionally, to attract red ants to feed in the larva of insects. This is happening because the plants get a direct supply of sugar and carbohydrates that boost the immunity of the plant that ends up yielding better crops.

Moreover, the laboratories of CSE tests samples of popular brands of soft drinks in the US and found that they didn’t contain pesticide residue.

More than 95% of the US soft drinks are made with municipal water supplies that contain the same toxins and pharmaceuticals like trimethoprim, sulfamethoxazole, gemfibrozil, estrone, carbamazepine, atrazine, atenolol, chlorine, arsenic, and fluoride.

The CSE have found that the regulations for the massive soft-drinks industry are weaker as compared to the industries for bottled water. The norms that regulate the cold drinks quality are inadequate, leaving the sector virtually unregulated.

So pampered is a sector of lucrative soft drinks that is exempted from the industrial licensing provisions under the Industries Act, 1951. We all know that the cola is not 100 percent organic or natural but for sure it must be safer that the other traditional poisons.

Read also: This Is What Happens To Your Body One Hour After Drinking A Can Of Coke

Other practical uses of Coca-Cola and Pepsi include:

Read also: Bye-Bye Sugary Drinks! This Is What Happens To Your Body When You Stop Drinking Soda