I had been up for 27 hours and was flat-out exhausted, but the news sent jolts of adrenaline through me like I’d never experienced before.

A Special Forces team hunting the man we called High Value Target No 1 had pulled someone from a hole in the ground. He answered the description.

And my bosses at the CIA were grilling me, the expert.

Could this burly, unkempt man truly be Saddam Hussein, the ruthless dictator of Iraq? The most wanted man in the world? 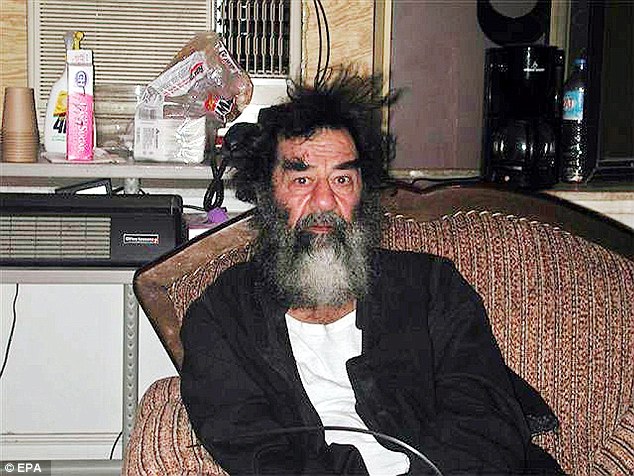 Could this burly, unkempt man truly be Saddam Hussein, the ruthless dictator of Iraq? The most wanted man in the world?

It was December 13, 2003, and I’d been in Iraq for eight weeks – a CIA analyst looking for leads that might take us to Saddam and his notorious henchmen. That was when I was called to see Buzzy Krongard, the CIA’s executive director.

The war to topple the regime had been going for nearly nine months, yet when it came to Saddam, all we’d turned up were ‘Elvis sightings’, as we called them. Until, that is, troops searching a farm near Saddam’s home village of Tikrit found a large bearded man concealed in a tiny underground bunker.

Now a group of senior officers were quizzing me in Krongard’s office; how, they asked, would I make a definitive identification? I told them about the tribal tattoos on Saddam’s right hand and wrist, the bullet scar on his left leg and that his lower lip tended to droop to one side, something I picked up from studying videotapes.

Krongard interrupted me: ‘We need to make sure this is Saddam and not one of those body doubles.’

The myth – and it was a myth – that Saddam maintained multiple lookalikes was a source of wry amusement to those of us who worked in intelligence, but I decided silence was the better part of valour and started compiling a list of questions only the dictator could answer.

The military was flying the putative Saddam to Baghdad airport that night and it was decided we’d make the identification there. 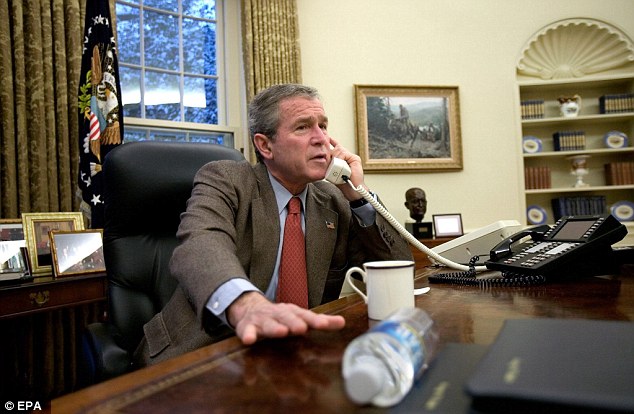 In late 2007, I was summoned to give a detailed presentation to George W. Bush at the Oval Office. What kind of a man had Saddam been, he asked me?

At midnight, after a long wait, the convoy was ready. Men in night-vision goggles drove us at 100mph down the Airport Road, a no-go zone at night. At the airport, a side road led to a series of low-slung blockhouses that once housed Saddam’s Special Republican Guard. Inside, I found pandemonium and another wait until finally a GI said, ‘OK, guys. You’re up.’

Suddenly the door opened and I immediately found myself sucking in air. There he was, sitting on a metal folding chair, wearing a white dishdasha robe and blue quilted windbreaker.

There was no denying that the man had charisma. He was big – 6ft 1in – and thickly built. Even as a prisoner who was certain to be executed, he exuded an air of importance. 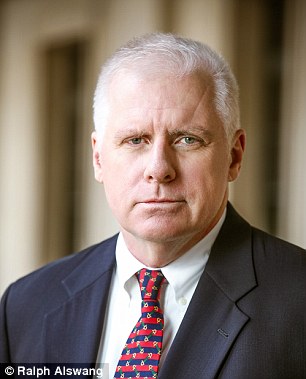 I spoke first through a translator. ‘I have some questions I’d like to ask you, and you are to answer them truthfully. Do you understand?’

Saddam nodded. ‘When was the last time you saw your sons alive?’

I expected Saddam to be defiant, but I was taken aback by the aggression of his reply: ‘Who are you guys? Are you military intelligence? Mukhabarat [civilian intelligence]? Answer me. Identify yourselves!’

I noted his tribal tattoos and that his mouth drooped. Now I needed to see his bullet wound.

There was so much we wanted to know. How had he escaped from Baghdad? Who had helped him? He would not say, answering only the questions he wanted to.

‘Why don’t you ask me about politics? You could learn a lot from me,’ he barked. He was especially vocal on the rough treatment he’d received from the troops who brought him in, launching a long diatribe.

I was incredulous. Here was a man who didn’t think twice about killing his own people complaining about a few scratches. He lifted his dishdasha to show the damage to his left leg. I saw an old scar. Was it the bullet wound, I asked him. He assented with a grunt – the final piece of proof. We’d got him.

Capturing Saddam was all very well, but now we had to get to the truth about his regime, and in particular the weapons of mass destruction that had been the pretext for the invasion. His response was simply to mock us. 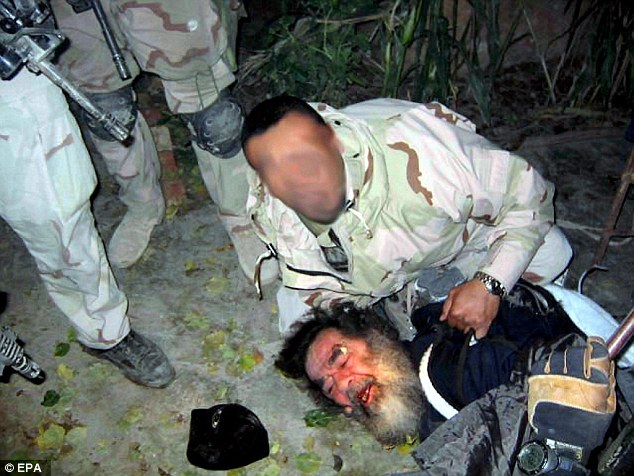 ‘You found a traitor who led you to Saddam Hussein. Isn’t there one traitor who can tell you where the WMDs are?’ He warmed to the subject, saying Americans were a bunch of ignorant hooligans who did not understand Iraq and were intent on its destruction.

Ignoring his goading, we asked Saddam if he’d ever considered using WMDs pre-emptively against US troops in Saudi Arabia. ‘We never thought about using weapons of mass destruction. It was not discussed. Use chemical weapons against the world? Is there anyone with full faculties who would do this? Who would use these weapons when they had not been used against us?’

This was not what we had expected to hear. How, then, had America got it so wrong?

Saddam had an answer: ‘The spirit of listening and understanding was not there – I don’t exclude myself from this blame.’ It was a rare acknowledgment that he could have done more to create a clearer picture of Iraq’s intentions.

Was he playing with us, twisting the truth to spare his pride? 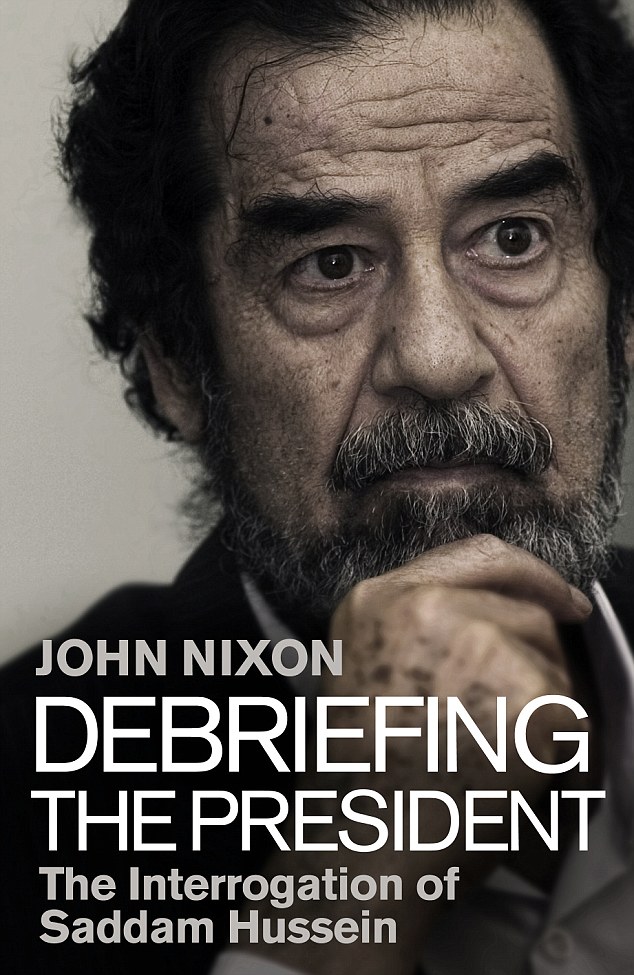 Debriefing The President: The Interrogation Of Saddam Hussein, by John Nixon, is published on December 29 by Bantam Press at £16.99

I asked about his notorious use of chemical weapons against the Kurdish city of Halabja during the Iran-Iraq war. He became furious. ‘I am not afraid of you or your president. I will do what I have to do to defend my country!’

Then he turned to me and sneered: ‘But I did not make that decision.’

We decided to close the briefing. As Saddam left the room, he glared at me. I have annoyed quite a few people in my life, but no one has ever looked at me with such murderous loathing.

My superiors were delighted at the progress we were making, yet something nagged at me about the exchange. My gut told me that there was some truth in what Saddam had said. He was incensed about Halabja. Not because his officers had used chemical weapons – he showed no remorse – but because it had given Iran a propaganda field day.

It was not the only thing that would surprise me. For example, in my years studying Saddam, I never doubted the received wisdom that his stepfather in Tikrit beat him. Many eminent psychiatrists who had analysed him from afar said this was why Saddam was so cruel and why he wanted nuclear weapons.

Yet, in the course of my further interrogations, Saddam turned our assumptions upside down, saying his stepfather was the kindest man he had ever known: ‘Ibrahim Hasan – God bless him. If he had a secret, he would entrust me with it. I was more dear to him than his son, Idham.’

I asked about the CIA’s belief that Saddam suffered great pain from a bad back and had given up red meat and cigars. He said he didn’t know where I was getting my intelligence, but it was wrong. He told me he smoked four cigars every day and loved red meat. He was also surprisingly fit.

The CIA profile of Saddam suggested he was a chronic liar, yet he could be quite candid. Our perception that he ruled with an iron grip was also mistaken. It became clear from our interrogations that in his final years, Saddam seemed clueless about what had been happening inside Iraq. He was inattentive to what his government was doing, had no real plan for the defence of Iraq and could not comprehend the immensity of the approaching storm.

Saddam was quick, too, to deny involvement in 9/11. ‘Look at who was involved,’ he said. ‘What countries did they come from? Saudi Arabia. And this [ringleader] Muhammad Atta, was he an Iraqi? No. He was Egyptian. Why do you think I was involved in the attacks?’

Saddam had actually believed 9/11 would bring Iraq and America closer because Washington would need his secular government to help fight fundamentalism. How woefully wrong he had been.

During our talks, we often heard muffled explosions. Saddam inferred things were not going well for the US forces and took pleasure in the fact. ‘You are going to fail,’ he said. ‘You are going to find that it is not so easy to govern Iraq.’ History has proved him right. But back then, I was curious why he felt that way.

‘Because you do not know the language, the history, and the Arab mind,’ he said. ‘It’s hard to know the Iraqi people without knowing its weather and its history. The difference is between night and day and winter and summer. That’s why they say the Iraqis are hard-headed – because of the summer heat.’

He chuckled and added: ‘Next summer, when it is hot, they might revolt against you. The summer of 1958 got a little hot. In the 1960s, when it was hot, we had a revolution. You might tell that to President Bush!’

It was several years and several more postings to Iraq before I could explain the realities of Iraq to the President, face to face. By now, Saddam had been tried and executed, finally dispatched in late 2006.

But in late 2007, I was summoned to give a detailed presentation to George W. Bush at the Oval Office. What kind of a man had Saddam been, he asked me?

I told him that he was disarming at first and used self-deprecating wit to put you at ease.

The President looked as if he was going to lose his cool. I quickly explained that the real Saddam was sarcastic, arrogant and sadistic, which seemed to calm Bush down.

He looked at Vice-President Dick Cheney and their eyes locked in a knowing way. As I was leaving, he joked: ‘You sure Saddam didn’t say where he put those vials of anthrax?’ Everyone laughed, but I thought his crack inappropriate. America had lost more than 4,000 troops.

Several months later, I was asked to go back to the White House. This time, the President looked annoyed and distracted and asked for a briefing on the Shia cleric called Muqtada al-Sadr, the leader of the Mahdi Army, then engaged in dangerous insurgency against the coalition. This was not on the agenda.

In his 2010 memoir, Bush wrote: ‘I decided I would not criticise the hardworking patriots of the CIA for the faulty intelligence on Iraq.’ But that is exactly what he did. He blamed the agency for everything that went wrong and called its analysis ‘guesswork’ while hearing only what he wanted to hear.

I do not wish to imply that Saddam was innocent. He was a ruthless dictator who plunged his region into chaos and bloodshed. But in hindsight, the thought of having an ageing and disengaged Saddam in power seems almost comforting in comparison with the wasted effort of our brave men and women in uniform and the rise of Islamic State, not to mention the £2.5 trillion spent to build a new Iraq.

Debriefing the President: The Interrogation of Saddam Hussein by John Nixon © John Nixon, 2016