Thích Quảng Đức was a Vietnamese Mahayana Buddhist monk who burned himself to death at a busy Saigon road intersection on 11 June 1963.

Under the rule of Ngo Dinh Diem, South Vietnam largely advanced the agenda of the country’s Catholic minority and discriminated against Buddhist monks. In one of the most dramatic instances of individual protest, Quang Duc doused himself in gasoline in the middle of a Saigon street and lit himself ablaze.

Photographs taken by Malcolm Browne of the self-immolation (who also won the Pulitzer Prize for the photograph bellow) quickly spread across the wire services and were featured on the front pages of newspapers worldwide. The self-immolation was later regarded as a turning point in the Buddhist crisis and a critical point in the collapse of the Diệm regime.

John F. Kennedy said in reference to a photograph of Duc on fire, “No news picture in history has generated so much emotion around the world as that one.”

The famous quote by David Halberstam, American journalist who was present at the scene, adds a lot of detail to the visual experience we have with the picture:

“I was to see that sight again, but once was enough. Flames were coming from a human being; his body was slowly withering and shriveling up, his head blackening and charring. In the air was the smell of burning human flesh; human beings burn surprisingly quickly. Behind me I could hear the sobbing of the Vietnamese who were now gathering. I was too shocked to cry, too confused to take notes or ask questions, too bewildered to even think.

Later we learned that the man was a priest named Thich Quang Duc who had come to the square as part of a Buddhist procession, had been doused with gasoline by two other priests, had then assumed the cross-legged “lotus” position and had set a match to himself. As he burned he never moved a muscle, never uttered a sound, his outward composure in sharp contrast to the wailing people around him.” 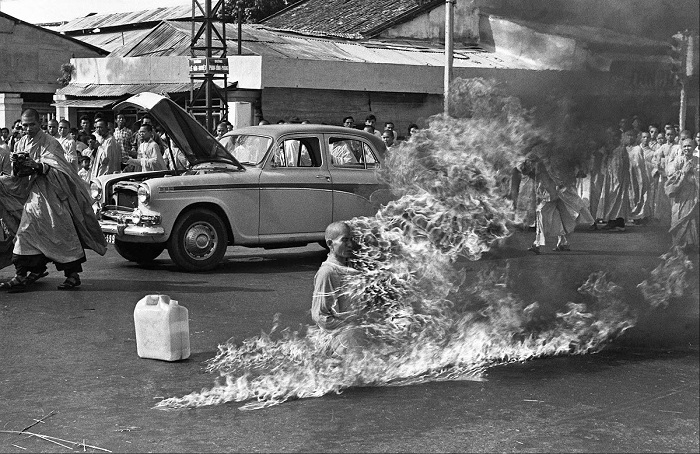 Watch The Video Of The Vietnamese Buddhist Monk Who Burned Himself To Death:

Watch: Qi Gong Master Demonstrates “Chi” In RARE Footage – THIS Is The SHOCKING Power We ALL Posses!