Okay, where to begin?

With this paper, I want to demonstrate that we are probably living in the most important century for the humankind, as (and this is not only a strong intuition) there’s no doubt in my mind that the final proof of extraterrestrial life will be found within the century.

Indeed, as scientific technology progress nowadays in an exponential way, there is an increasing volume of clues that undoubtedly shows that we will not have to wait anymore longer for the outside of solar system to emerge.

Since the first published, confirmed discovery made in 1988 (Gamma Cephei A planet) by the Canadian astronomers Bruce Campbell, G. A. H. Walker, and S. Yang, there was an increasing numbers of discoveries. In 2011, the exoplanet catalog, regularly updated, contained 548 confirmed planets. Today, it is no less than 3557 confirmed planets, 2668 planetary systems and 601 multiple planet systems that were discovered.

Almost each week, a new planet is discovered and/or confirmed… It’s even became mundane: 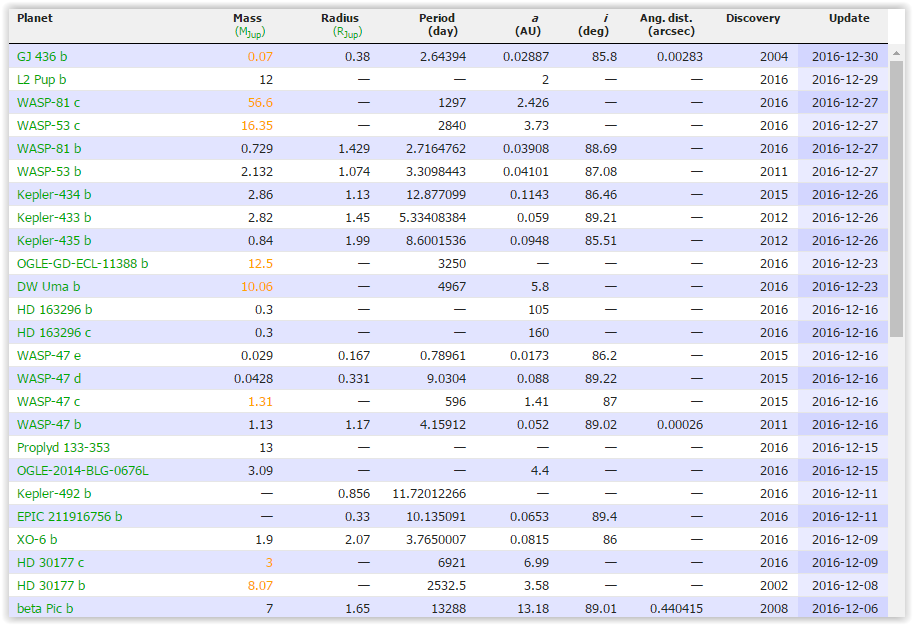 At the same time, the number of exoplanets that have an ESI (Earth Similarity Index) similar to that of the Earth increased as well, especially with the discoveries of Kepler-438b (discovered in 2015, ESI 0.88, thought it is apparently not habitable) and of Kepler-62e (discovered in 2013, ESI 0.83). 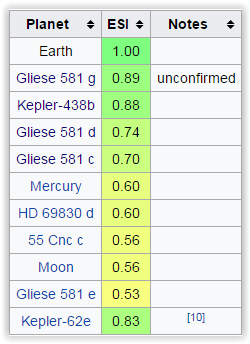 We also have to think about the fact that Mars has a 0.797 ESI, which is less than the two best Kepler candidates named above, and yet we think about a possible past (and even current) life on Mars.

Also, in order to really put things in perspective, a scientist team estimated (2013, november) that 22±8% of Sun-like stars in the Milky Way galaxy may have an Earth-sized planet in the habitable zone. Assuming 200 billion stars in the Milky Way, that would be 11 billion potentially habitable Earths, rising to 40 billion if red dwarfs are included. (!!) And only in our galaxy…

Read also: It’s OFFICIAL! China Admits To The Existence Of UFOs And Aliens

3. EXOPLANETS IN THE HABITABLE ZONE OF THEIR STAR

Since the launch of Kepler in 2009, the scientists have doubled the number of known exoplanets smaller than the size of Neptune. A hundred are smaller than 1.2 times the size of the Earth and even 21 are twice this same size, in the habitable zone of their star.

Nine of these have been validated (2016, May) and are plotted as orange disks in the map below. The previous known planets are marked as blue disks. 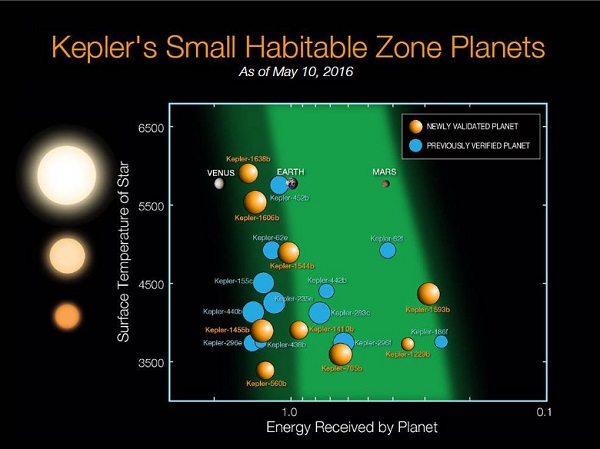 These planets are plotted relative to the temperature of their star and with respect to the amount of energy received from their star in their orbit in Earth units. The sizes of the exoplanets indicate the sizes relative to one another. The images of Earth, Venus and Mars are placed on this diagram for reference. The light and dark green shaded regions indicate the conservative and optimistic habitable zone. Credits: NASA Ames/N. Batalha and W. Stenzel

Looking at this map do incite to think that earth-like planets are very common, not exceptional at all, and that the number of their discovery will considerably increase in the near future.

The two updates wiki lists (exoplanets in the “conservative” and in the “optimistic” habitable zone) can be seen here.

As of February 2014, more than fifty transiting and five directly imaged exoplanet atmospheres have been observed, resulting in detection of molecular spectral features; observation of day–night temperature gradients; and constraints on vertical atmospheric structure.

Also, an atmosphere has been detected on the non-transiting hot Jupiter Tau Boötis b and water was detected (2013) in 5 exoplanets (HD 209458 b, XO-1b, WASP-12b, WASP-17b, and WASP-19b). One year later, NASA reported that HAT-P-11b is the first Neptune-sized exoplanet with a cloud-free atmosphere and water vapor as well.

Will 2017 be the year of the detection of an atmosphere, possibly with water vapor, on an Earth-sized exoplanet? I personally find the idea very plausible and a logical continuity to the discoveries.

Related: Dying Ex-CIA Worker Has Nothing To Lose And Reveals Dark Secrets About Area 51 & Aliens [Video]

5. UPCOMING MISSIONS AND PROJECTS THAT WILL INCREASE THE CHANCES

In the last days of 2016 years, interesting Internet papers are published that expose these projects. Their names are indicative of the enthusiasm of the exoplanets hunters:

They are saying more or less the same thing, in substance that 2017 will be a pivotal year for the exoplanet hunt with the following projects:

NASA will be launching TESS in 2017. Within its two-year mission, they plan to use the satellite to observe at least 200,000 stars and expect to discover thousands more exoplanets.

The 64-dish MeerKAT Radio Telescope in South Africa is so powerful that in a test run using only 16 of its 64 dishes, it was able to detect 1,300 galaxies where only 70 were previously known to exist. All 64 of those dishes are expected to be in place by the start of 2017, so we can expect big discoveries from this telescope. As if MeerKAT isn’t impressive enough, it’s actually just a small part of an even bigger project, the Square Kilometer Array (SKA).

The 500-meter (547-yard) wide Aperture Spherical Telescope (FAST), nicknamed Tianyan (Eye of Heaven), holds the world record not only in size but in sensitivity: it’s about twice as sensitive and between five and 10 times as fast in surveying as the previous record holder. This device went live in September this year, so it’ll likely contribute to many discoveries in 2017.

Just in case the potential for super-Earth discoveries in 2017 isn’t enough, NASA’s Hubble replacement, the James Webb Space Telescope, will join the hunt for exoplanets orbiting nearby stars in 2018. This telescope took 20 years and $8.8 billion to build, and it was designed with a view 100 times the size of Hubble’s. Supposedly, it is so powerful that it can detect a bumblebee on the Moon, so hopes are high it’ll be able to find more super-Earths.

Originally written by elevenaugust and published on Above Top Secret