Woolly mammoths roamed free across Europe, Asia, Africa and North America during the last Ice Age, before vanishing entirely about 4,000 years ago…

Scientists believe a combination of a changing global climate and hunting by humans contributed to their extinction. Now a team of researchers is using the latest techniques in genetic engineering to bring the woolly mammoth back—to fight climate change.

The team’s leader announced that he and his colleagues are close to creating a hybrid mammoth-elephant embryo, and could do so within two years.

Ahead of the annual meeting of the American Association for the Advancement of Science (AAAS) in Boston, Professor George Church of Harvard University spoke about the progress his team has made over two years of trying to recreate the genetic blueprint of the long-extinct woolly mammoth. According to Church, a world-renowned geneticist, his team believes it can create a mammoth-elephant hybrid, with many of the recognizable woolly mammoth features, in embryo form within two years.

Since 2015, Church and his fellow scientists have been working to isolate the mammoth genes and splice them into the DNA of an Asian elephant, the closest living relative to the woolly mammoth. To do this, they are using a gene-editing technique known as CRISPR/Cas9, which Church helped develop. Derived from a system bacteria uses to defend against viruses, the tool allows geneticists to “cut and paste” strands of DNA more precisely than ever before. 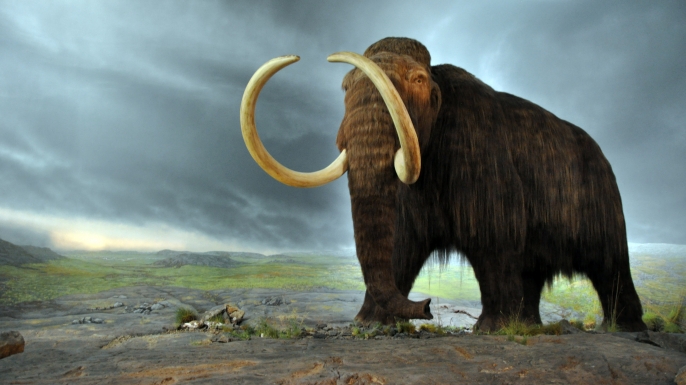 Model of a wooly mammoth at the Royal BC Museum in Victoria, Canada.

Such advances in genetic technology have allowed scientists to extract DNA from ancient mammoth specimens that have remained frozen for millennia in Siberian ice. Back in 2013, Russian scientists discovered a well-preserved woolly mammoth carcass trapped in the permafrost of northern Siberia for some 42,000 years. They named the specimen Buttercup.

Up to now, Church and his team have stopped at the at cell stage, but they are moving on to creating embryos blending the mammoth traits with Asian elephant DNA. The resulting hybrid, sometimes referred to as a “mammophant,” would be part elephant, but with distinctive mammoth traits, including small ears, subcutaneous fat, shaggy hair and blood that enables the animal to survive in freezing temperatures.

Despite their progress, the team said it would take years before they make a serious attempt to produce a living creature. They are planning to grow the embryo within an artificial womb in the laboratory, rather than find a female elephant as a surrogate mother.

Church’s team hopes their modifications will actually help preserve the Asian elephant, which is currently an endangered species. In addition, the scientists believe their work could help combat global warming by slowing the thawing of Arctic permafrost. When the permafrost melts, microbes devour the organic material underneath, and the process releases large amounts of methane, a powerful greenhouse gas, into the atmosphere.

Watch: Science Reveals What Humans Will Look Like In A 1,000 Years, And It’s Bizarre! [Video]

Back when herds of mammoths roamed the Arctic, they helped nurture the grasslands and suppress forest growth. But when they vanished, the grassland was eventually covered by forest and tundra. Paradoxically, tundra permafrost insulates the ground below it, keeping it warmer relative to the winter temperatures above. In another project, Russian scientists recently tried to recreate an Ice Age ecosystem by setting up a reserve in Siberia for wild horses, ox and bison. They found that during winter, when the air temperature was -40°C, the ground covered by snow remained a relatively warm -5 °C. In the places where animals had trampled down the snow, however, the ground temperature was -30°C.

Reintroducing woolly mammoths, the scientists believe, would help slow the thawing of permafrost in this way.

“They keep the tundra from thawing by punching through snow and allowing cold air to come in,” Church explained. “In the summer they knock down trees and help the grass grow.”

Despite such ambitious objectives, other scientists have voiced ethical concerns about the project.

“The proposed ‘de-extinction’ of mammoths raises a massive ethical issue,” Matthew Cobb, professor of zoology at the University of Manchester, told the Guardian. “The mammoth was not simply a set of genes, it was a social animal, as is the modern Asian elephant. What will happen when the elephant-mammoth hybrid is born? How will it be greeted by elephants?”

Gene-editing, as well as such ethical questions surrounding the practice, will be among the main topics for discussion at the upcoming AAAS conference.

Read also: 33 Shocking Illustrations Reveal How Animals Feel By Switching Them With Humans!