A 13-year-old boy who was one in only five people in the world with an extremely rare cancer that meant he had only two weeks left to live managed to make a miracle recovery!

Deryn Blackwell was diagnosed with leukaemia when he was just ten years old in 2010.

Just over a year later he was told he had a secondary cancer – Langerhans cell sarcoma -, which only five people in the world currently have.

Yet no one had ever been found to have the two cancers together making Deryn one in seven billion people to have it.

After nearly four years of hospital treatment, nothing was working – so his mum Callie resorted to trying to give Deryn Bedrocan, a cannabis-based painkiller that wasn’t available in the UK.

But despite doctors saying it could be effective, it had not been tested on children so she couldn’t prescribe it.

In an except from hew new book The Boy In 7 Billion, published in the Mail on Sunday, Callie said: “We took a decision that will horrify many parents reading this – and horrified me, too.

After all, I’d never seen anything positive come of smoking cannabis, and in my days working in nightclubs, illegal drugs had been my enemy.

But if it could help my darling boy escape his daily torment, I was willing to try it.” 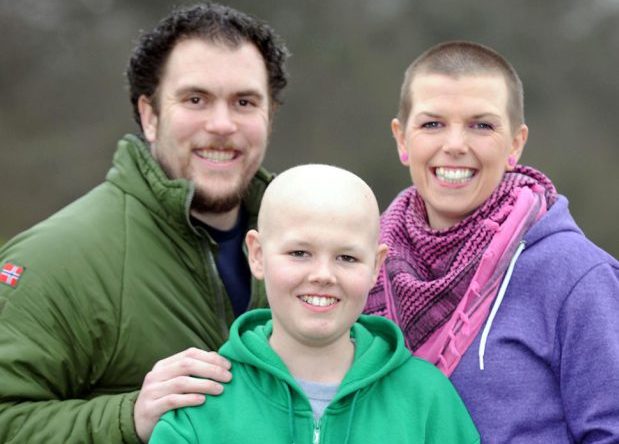 Now 17, Deryn is going from strength to strength (Picture: Rex)

They then set about finding some cannabis – Deryn’s dad, Simon, arranged to meet someone at a nearby petrol station to pick some up – despite them knowing it was a class B drug, which carries a sentence of up to five years’ imprisonment for possession.

Meanwhile, Deryn’s condition was worsening and doctors told them that if there was no improvement in two weeks, he would be placed in palliative care.

After buying a rice cooker and vegetable glycerine, Callie was able to make the ‘tincture’ suitable for a vaporise pen and gave it to Deryn.

Callie said: “After ten minutes, Deryn said that the pain had decreased a little and he felt more relaxed – the words we had been longing to hear.”

Yet his pain continued to come back and by December 2013, Deryn had moved out of hospital and into a hospice where he planned his own funeral.

Read Also: THIS Homemade Cannabis Oil Is Being Used To Treat Cancer – Here’s The Recipe

Then one night, Deryn woke up in the early hours of the morning and told his mum: “I don’t want any more morphine, Mum. It makes me feel like I’m not here.”

Not being able to bear seeing him in so much pain, Callie decided to give Deryn a small amount of cannabis tincture directly in his mouth when no one was looking.

After about half hour, he was no longer having a panic attack and felt at peace.

Callie said: “Over the coming days, my priority was allowing him to die with his faculties intact, so whenever Deryn felt a twinge somewhere, I would put another 5ml of the tincture underneath his tongue and, within a few minutes, he felt good again.

Deryn’s mouth, fingers, stomach, gums, tongue, hips, knees, legs and back had been constantly painful for as long as I could remember, so this was nothing short of fantastic.”

A short while later, a hospice doctor told Callie: “We’re no longer sure Deryn is dying.”

Since then, he has gone from strength to strength and was removed form the hospice.

He went back to school in Norfolk and despite just nine months of schooling in four years, Deryn, now 17, left school with seven GCSE’s.

Read Also: Your Body Is Acidic. Here Is What You Need To Do (The Real Truth Behind Cancer You Will Never Hear From Your Doctor)

Callie said: “I am reminded of my miracle boy every time I look at Deryn and I know deep in my heart that whatever the future may throw at us, we can cope. We always do.”

The Boy in 7 Billion will be published on April 6 by Mirror Books. It can be pre-ordered at http://www.mailbookshop.co.uk.

Originally written by Tanveer Mann and published on Metro