Ancient stone carvings confirm that a comet struck the Earth around 11,000BC, a devastating event which wiped out woolly mammoths and sparked the rise of civilizations.

Experts at the University of Edinburgh analysed mysterious symbols carved onto stone pillars at Gobekli Tepe in southern Turkey, to find out if they could be linked to constellations.

The markings suggest that a swarm of comet fragments hit Earth at the exact same time that a mini-ice age struck, changing the entire course of human history.

Scientists have speculated for decades that a comet could be behind the sudden fall in temperature during a period known as the Younger Dryas. But recently the theory appeared to have been debunked by new dating of meteor craters in North America where the comet is thought to have struck.

However, when engineers studied animal carvings made on a pillar – known as the vulture stone – at Gobekli Tepe they discovered that the creatures were actually astronomical symbols which represented constellations and the comet.

The idea had been originally put forward by author Graham Hancock in his book “Magicians of the Gods“.

Using a computer programme to show where the constellations would have appeared above Turkey thousands of years ago, they were able to pinpoint the comet strike to 10,950BC, the exact time the Younger Dryas begins according to ice core data from Greenland.

The Younger Dryas is viewed as a crucial period for humanity, as it roughly coincides with the emergence of agriculture and the first Neolithic civilisations.

Before the strike, vast areas of wild wheat and barley had allowed nomadic hunters in the Middle East to establish permanent base camps. But the difficult climate conditions following the impact forced communities to come together and work out new ways of maintaining the crops, through watering and selective breeding. Thus farming began, allowing the rise of the first towns.

Edinburgh researchers said the carvings appear to have remained important to the people of Gobekli Tepe for millennia, suggesting that the event and cold climate that followed likely had a very serious impact.

Dr Martin Sweatman, of the University of Edinburgh’s School of Engineering, who led the research, said: “I think this research, along with the recent finding of a widespread platinum anomaly across the North American continent virtually seal the case in favour of (a Younger Dryas comet impact).

Our work serves to reinforce that physical evidence. What is happening here is the process of paradigm change.

It appears Göbekli Tepe was, among other things, an observatory for monitoring the night sky.

One of its pillars seems to have served as a memorial to this devastating event – probably the worst day in history since the end of the ice age.” 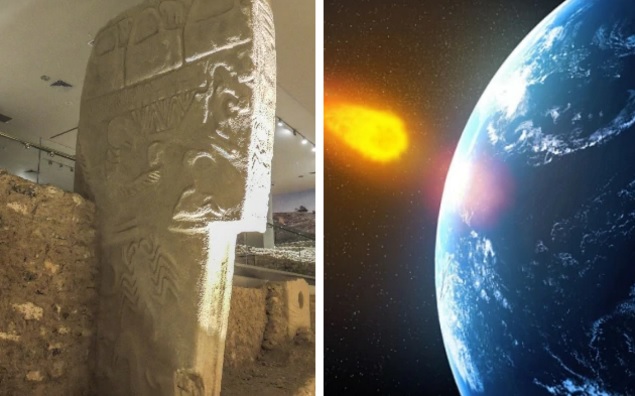 Gobekli Tepe, is thought to be the world’s oldest temple site, which dates from around 9,000BC, predating Stonehenge by around 6,000 years.

Researchers believe the images were intended as a record of the cataclysmic event, and that a further carving showing a headless man may indicate human disaster and extensive loss of life.

Symbolism on the pillars also indicates that the long-term changes in Earth’s rotational axis was recorded at this time using an early form of writing, and that Gobekli Tepe was an observatory for meteors and comets.

The finding also supports a theory that Earth is likely to experience periods when comet strikes are more likely, owing to the planet’s orbit intersecting orbiting rings of comet fragments in space.

But despite the ancient age of the pillars, Dr Sweatman does not believe it is the earliest example of astronomy in the archaeological record.

“Many paleolithic cave paintings and artefacts with similar animal symbols and other repeated symbols suggest astronomy could be very ancient indeed, he said.

If you consider that, according to astronomers, this giant comet probably arrived in the inner solar system some 20 to 30 thousand years ago, and it would have been a very visible and dominant feature of the night sky, it is hard to see how ancient people could have ignored this given the likely consequences.”

The research is published in Mediterranean Archaeology and Archaeometry.

Originally written by Sarah Knapton and plublished on Telegraph