For thousands of years, Judean date palm trees were one of the most recognizable and welcome sights for people living in the Middle East — widely cultivated throughout the region for their sweet fruit, and for the cool shade they offered from the blazing desert sun.

From its founding some 3,000 years ago, to the dawn of the Common Era, the trees became a staple crop in the Kingdom of Judea, even garnering several shout-outs in the Old Testament. Judean palm trees would come to serve as one of the kingdom’s chief symbols of good fortune; King David named his daughter, Tamar, after the plant’s name in Hebrew.

By the time the Roman Empire sought to usurp control of the kingdom in 70 AD, broad forests of these trees flourished as a staple crop to the Judean economy — a fact that made them a prime resource for the invading army to destroy. Sadly, around the year 500 AD, the once plentiful palm had been completely wiped out, driven to extinction for the sake of conquest.

In the centuries that followed, first-hand knowledge of the tree slipped from memory to legend. Up until recently…

During excavations at the site of Herod the Great’s palace in Israel in the early 1960’s, archaeologists unearthed a small stockpile of seeds stowed in a clay jar dating back 2,000 years!

For the next four decades, the ancient seeds were kept in a drawer at Tel Aviv’s Bar-Ilan University. But then, in 2005, botanical researcher Elaine Solowey decided to plant one and see what, if anything, would sprout.

“I assumed the food in the seed would be no good after all that time. How could it be?” said Solowey. She was soon proven wrong.

Amazingly, the multi-millennial seed did indeed sprout — producing a sapling no one had seen in centuries, becoming the oldest known tree seed to germinate. 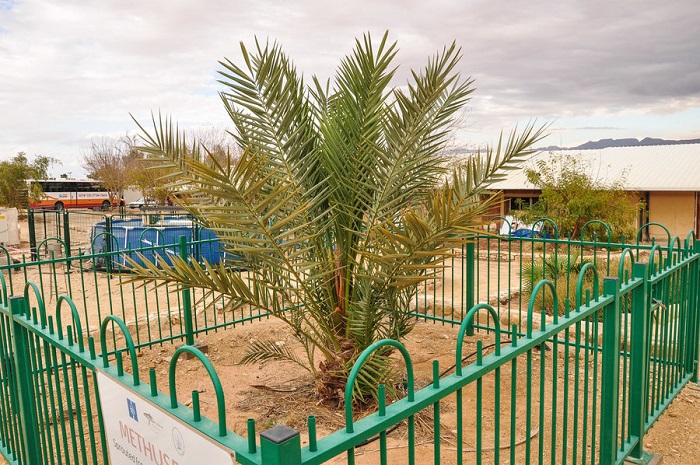 Read Also: Archaeologists Dig Up An 800-Year-Old Pot. What They Found Inside Is Changing History!

Today, the living archeological treasure continues to grow and thrive; In 2011, it even produced its first flower — a heartening sign that the ancient survivor was eager to reproduce!

It has been proposed that the tree be cross-bred with closely related palm types, but it would likely take years for it to begin producing any of its famed fruits. Meanwhile, Solowey is working to revive other age-old trees from their long dormancy.

Long the only lonely representative of its kind, the Judean palm is now reproducing and giving researchers a unique glimpse back in time.

Originally written by Stephen and published on Treehugger