Scientists have discovered a mysterious ‘Cold Spot’ in space that could prove our universe is just one of an endless string of realities!

They call it the multiverse. It’s a cosmos in which there are multiple universes. And by multiple, we mean an infinite number. These uncountable realms sit side by side in higher dimensions that our senses are incapable of perceiving directly.

In one universe you might be president of the United States, while in another you could be made of gelatin.

It sounds baloney but the latest piece of evidence that could favor a multiverse comes from the UK’s Royal Astronomical Society. They recently published a study on the so-called ‘cold spot’. This is a particularly cool patch of space seen in the radiation produced by the formation of the Universe more than 13 billion years ago.

For years, scientists have been perplexed by the so-called ‘cold spot’, which measures around 1.8 billion light years across.

Measurements of the universe’s background radiation found this spot is colder than its surroundings by around 0.00015 degrees Celsius (0.00027 degrees Fahrenheit).

Read Also: This Is The Most Detailed Map Of The Universe To Date, And It’s Breathtaking!

Researchers had previously suggested that the spot was cooler simply because it contained as many as 10,000 galaxies less than other, comparable regions of space.

But this new study has shown that this ‘massive supervoid’ could not possibly exist, meaning the Cold Spot cannot be explained by any ‘missing’ matter.

This opens the origin of the Cold Spot to more peculiar explanations, with one being that it is proof of the ‘multiverse’.

One of the study’s authors, Professor Tom Shanks of Durham University, told the RAS, “We can’t entirely rule out that the Spot is caused by an unlikely fluctuation explained by the standard [theory of the Big Bang]. But if that isn’t the answer, then there are more exotic explanations. Perhaps the most exciting of these is that the Cold Spot was caused by a collision between our universe and another bubble universe. If further, more detailed, analysis … proves this to be the case then the Cold Spot might be taken as the first evidence for the multiverse.”

“Each alternate universe carries its own different version of reality.” astronomy expert Dr Stuart Clarke wrote in the Guardian.“There will be one where you wrote this column and I read it… even a really weird one in which Donald Trump uses twitter to spread nothing but amusing cat videos.”

The Cold Spot was produced when the universe formed more than 13 billion years ago.

It was first spotted by Nasa’s WMAP satellite in 2004, a sighting that was later confirmed by the ESA’s Planck mission in 2013. 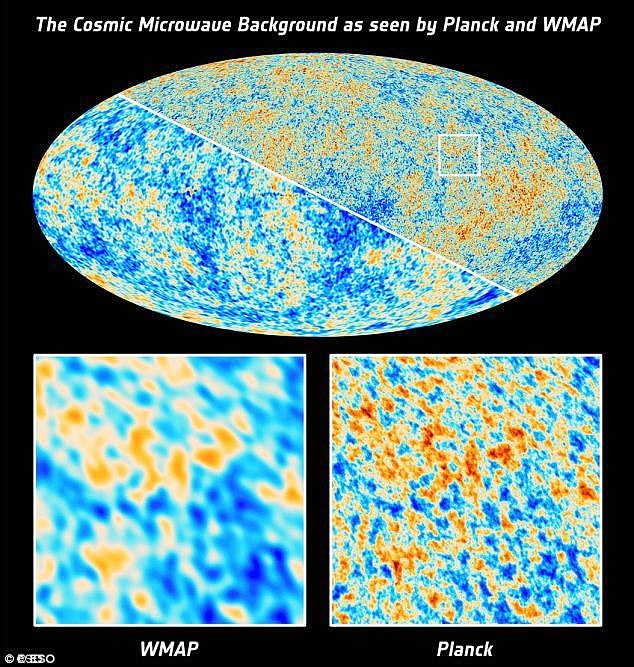 The Cold Spot was produced when the universe formed more than 13 billion years ago. It was first spotted by Nasa’s WMAP satellite in 2004, a sighting that was later confirmed by the ESA’s Planck mission in 2013

Rather than the Cold Spot existing as a single, massive supervoid, the new study suggests galaxies in the spot cluster around smaller voids that spread over the region like bubbles.

But these clusters of galaxies cannot explain the Cold Spot’s lower temperature.

In order to prove that the clusters are responsible for the anomalous Cold Spot, the researchers say a non-standard cosmological model is needed.

“But our data place powerful constraints on any attempt to do that,” said Ruari Mackenzie, the study lead author.

The study’s simulations show there is only a two per cent chance that the Cold Spot formed randomly, meaning – multiverse or not – there is plenty more research to be done on the mysterious region.