Karma means conditioned action. Meditation Master Lama Thubten Yeshe calls it ‘habit energy’. When you are controlled by habit energy that’s what the Buddhist call being trapped in Samsara – the wheel of suffering; trapping you within an endless cycle. Another name for it is addiction. There is another way of being, an enlightened way, where you are not controlled by habit energy or social conditioning but instead you are moved by the spontaneous intelligence of the present moment.

Addictions of all kinds are rampant in the modern world from drug addictions, junk food addictions, $ex addictions to gambling addictions. Many people have been touched by addiction in their lives and can understand the power and force of addicted behavior; you can’t resist the temptation or urge to get the object of your desire, over and over again, but can never be satisfied or feel complete and what you crave inevitably makes you suffer.

This is what the Buddhist are talking about when it comes to karma; being controlled by habitual behaviurs and conditioned reactions, which also seems to be a great definition for addiction too. We can take this to the level of personality and self identity too. A set of behaviors and traits that are repeated over long period of time are identified in Psychology as a personality, and it’s easy to confuse the personality with the person. But personality is just the habit of acting and reacting in a certain way.

Buddhist say that the root of suffering and the foundation of being controlled by karma is believing in a fixed personality to be who you really are and trying to protect that personality from harm and to acquire things that bring it pleasure. Literally attachment and aversion based on a fictitious belief in who you are. The antidote to addiction is always contentment. Finding contentment comes from meditation and finding completion in the present moment without anything extra needed or anything that needs to be removed.

An enlightened way of being can be found through meditation; firstly putting a gap into your habitual reactions by being the detached witness. This naturally connects you with love and wisdom which are the natural fragrances of non-judgmental witnessing. 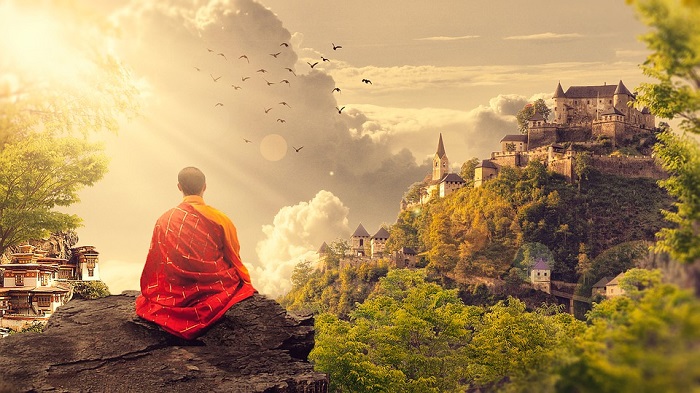 The first step  to recovering from karma and addictive behavior is to at least suspect that there might be a better way to find happiness than constantly chasing your desires and compulsively acting. That is why enlightenment is taught, to give people hope that there is better way of being. Before you can experience it for yourself it actually takes a bit of faith and trust that what others have found you can find too. Trust that there is more happiness found in enlightenment than there is acquiring the things you crave.

The wisdom that comes from being a silent witness is sensitive and creates an ever new understanding of what’s happening in the present moment. This present centred intelligence is available to us in every moment but is overwhelmed by the usual habitual reactions and therefore never gets a chance to express itself. Treating every moment as new and fresh brings a sense of child like joy back into our lives and an inner bliss that chasing  your addictions can never compare with.

The way of meditation is to break this cycle of habitual reacting and come into contact with the sensitivity of natural intelligence.  Taoist have referred to this as the Tao a way of being in a ‘Flow’ – in tuned with universal forces. This way is not a small, self- centred way instead it is a universal way which has access to a universal intelligence that contains so much more wisdom than our learnt or conditioned responses. You are literally supported by the universe.

Even if you cannot fully embrace or contact the wisdom of open awareness in the present moment, the act of being the silent witness allows for the inner space and detachment from compulsively acting so as to make wise choices until you can eventually be fully guided by intuitive intelligence.

Another way of putting it is; when you can become the sky like awareness, you are no longer affected by the passing weather.

A Buddhist practitioner Andrea Pema describes it like this – “Most people trust the thinking mind as their primary source of decisions. But the thinking mind is based on fixation on thoughts which creates karma and further connects the thinking mind with the subconscious conditioning. Many decisions are based on feelings wich are just a reproduction of some conditioning. There is another source of intelligent decisions; if we have learned in our meditation just to be open, cognizant and thought free we can remain in this bright space- still, yet awake and make decisions out of this cognizant clarity. It is pure knowing without any need for a thinking process to interfere. We just remain in this space and work spontaneously with whatever the present moment brings along.” 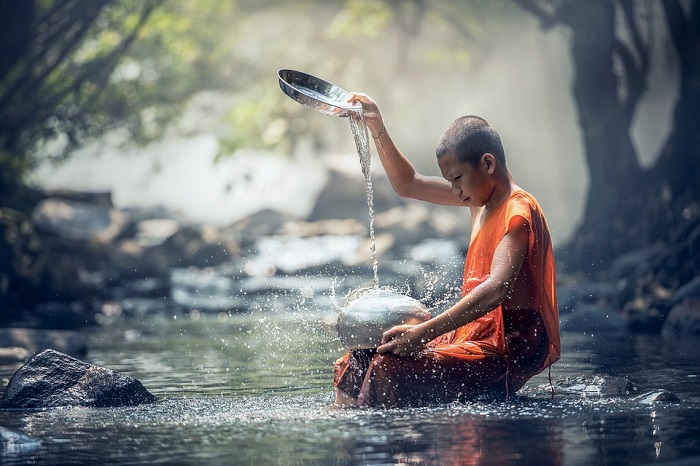 The key is to really know the difference between being controlled by karma (habit energy) or remaining in an open natural awareness. Habit can be comfortable and to initially move outside karmic responses can be challenging and uncomfortable and there is a period of withdrawal from giving up the things that you have craved in attempt to find satisfaction.  But eventually through training  you become familiar with a natural open awareness and this becomes the norm; it is an expansive and natural way of being. This natural way of being also has love and harmony automatically included in it, nothing else needs to be added you can finally overcome the compulsion of chasing future fulfilment and come home to the natural state of enlightenment.

Read After: 10 Signs You Are Experiencing A Recalibration Of Your Mind-Body-Soul System

The natural way is compelled by spontaneity and intuition and has no ‘doer’ – there is no ‘self’ concern there is only the action of no-action. In other words it is simple and un-contrived. Because there is no fixed self only the open space of natural awareness there is no one to be harmed by karma and no need to exploit others to benefit some imagined self. The enlightened way of being stems from a sense of completion and contentment already and actions spring spontaneously from this wholeness. Not wanting anything from the world you are free from karma and can finally really enjoy every moment.