Ever since the early 1950s, long before the first “Men in Black” movie hit the silver screen in 1997, men dressed in identical black suits, hats and sunglasses, claiming to be government agents, have reportedly shown up in black cars at the homes or offices of people who reported UFO sightings.

According to those who were paid these unwelcome visits, the MIBs threatened or harassed the eyewitnesses into staying quiet about their UFO encounters. 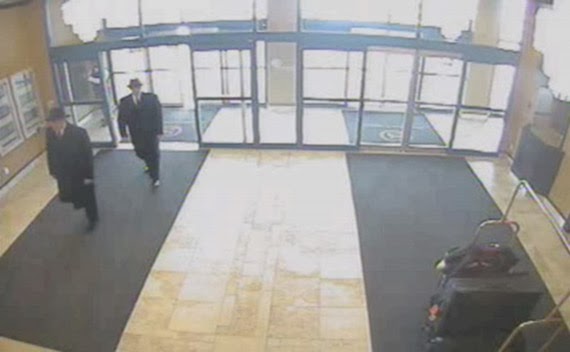 1). 1947: Harold Dahl reported seeing a group of UFOs while he was on a boat in Washington’s Puget Sound. Soon after, he said, he was approached by a black-suited individual who threatened him and his family if he ever talked again about the UFO sighting.

2). 1967: Robert Richardson was driving his car at night in Toledo, Ohio, when he hit something, which, he claimed, then vanished. He found a piece of metal that he believed originated from the mysterious thing he hit. A few days later, two men, wearing black hats and sunglasses and driving a black 1953 Cadillac, visited Richardson at his home at 11 p.m. to ask questions.

A week later, two other men arrived, dressed in black suits, and asked Richardson to turn over the metal to them. When he informed them he had sent it for analysis, he said, they threatened to harm his wife if he didn’t get it back. He never heard from them again.

But why? Who were — and, in some cases, still are — these strange individuals who give out seemingly meaningless warnings about UFO sightings and try to intimidate people?

“They are the archetypal sinister person who turns up on the doorstep specifically in relation to a UFO encounter,” said Nick Redfern, author of “The Real Men in Black” (more insights from Nick, bellow).

“People who have been visited by MIB tend to fall into two categories: One is the UFO witnesses. The other category is researchers who’ve been visited,” Redfern told The Huffington Post.

After digging closely into the history of many reported MIB encounters, Redfern thinks he has a good handle on what may be going on.

“What we have, I’m pretty sure, is a sort of covert department or office or personnel within the official infrastructure. There are people who dress in black deliberately and go around and threaten people in certain circumstances relative to UFOs,” he suggested.

“And they look like what you see in the ‘Men in Black‘ movies. They look like agents of the government, like [actors] Will Smith and Tommy Lee Jones. And they issue veiled warnings not to talk about their UFO encounter.”

But then there are the creepier MIB stories that emerge…

3). Like the one told by Dr. Herbert Hopkins. The respected family physician from Old Orchard Beach, Maine, was home alone on the night of Sept. 11, 1976. At the time, Hopkins was studying a UFO incident.

The phone rang, and a man’s voice identified himself as a representative of a New Jersey UFO organization (which turned out to be phony).

“He wanted to know if he could come here and talk to me about the UFO case. He also asked if I was alone, and I said yes,” Hopkins told this reporter in 1978 for a story broadcast on NBC Radio.

When Hopkins walked from the phone to the door and turned on the light, the man was already coming up the steps.

“If he was even as close as across the street or next door telephoning, he could not possibly have gotten here as soon as I did to turn on the light for him,” recalled Hopkins.

When the stranger came in, Hopkins was struck by his appearance.

“He wore a neatly tailored black suit, black shoes, black socks, a white shirt with black tie, and he wore a black derby. You don’t see derbies very often, and I thought to myself, ‘This guy looks just like an undertaker.’ When he sat down, he removed his derby.

“This character was as bald as an egg. He didn’t even have eyebrows or eyelashes. It looked like he had smooth, plastic skin — like a doll except that it was a dead-white color,” Hopkins said.

“His lips were a brilliant ruby red, and he spoke in an expressionless, monotone, scanning speech. He constructed no phrases and sentences — just a sequence of words evenly spaced. His voice was completely passive with no inflection or intonation, as if you were hearing it from a machine that could talk.”

During the short time they were together, Hopkins and the strange man talked about the UFO case that the doctor had been investigating. Hopkins also noticed other very odd things about this Man in Black.

“He sat perfectly motionless and wore grey suede gloves. He idly brushed his lips with the back of a glove, and when he put his hand down, the back of his glove was bright red and the red on his mouth was smeared, so I knew he was wearing lipstick.

“Then I could see that his mouth was a perfectly straight slit. Apparently, he did not have what we call lips, so the lipstick was put on as a decoy — his mouth was more like a ventriloquist’s dummy.”

This classic MIB story gets even stranger…

The odd visitor told Hopkins to take a coin out of his pocket and hold it in the palm of his hand.

“He said, ‘Watch the coin,’ and it started to develop a silver color instead of copper, and then the silver became bluish and the penny was getting quite fuzzy, out of focus, blurred, and then it simply was gone — it slowly dematerialized.”

Following the coin magic, the stranger ordered the doctor to destroy all information he had gathered about the UFO case.

“As he spoke his last words, I noticed his speech was slowing down. His words became slower and farther spaced. He slowly got to his feet, unsteadily, and he said very slowly, ‘My – energy – is – running – low – must – go – now – goodbye.’ Just like that.”

Hopkins said that the MIB – whoever or whatever he was – clung tightly to the railing as he went down the steps outside, placing both feet on each step, and then disappeared around the corner into a bright light.

When the chilling encounter was over, a terrified, intimidated Hopkins destroyed all traces of any UFO materials he had.

So who are the real Men in Black who have scared people for decades? Are they government agents trying to spread disinformation about UFOs? But for what purpose?

“The MIB movies are very entertaining, but they portray one angle of a mystery that is actually two-pronged,” said Redfern.

“You’ve got this government conspiracy angle, but you’ve also got this Gothic archaic mystery that ties in as much with the occult and paranormal as it does with flying saucers.”

5). Another MIB encounter — perhaps the strangest of all — took place in the seaside town of Scarborough, North Yorkshire in 1968.

Adele (a pseudonym), who was sixteen at the time, answered the door to what appeared to be a very strange insurance salesman. He was tall, wore a black suit and tie, and had a ‘florid’ complexion.

After staring at the sixteen year old and smiling for an unnerving length of time he ‘jerked’ into action and asked Adele “do you have insurance? Is it now?” Adele later remarked that his voice seemed to be computerized.

She suggested that the insurance salesman come back later when her parents were home. At that moment, the man suddenly began to sweat profusely. He removed his hat to reveal a bald and extremely pale head. Adele could now see that he was wearing makeup to darken his face.

Next, he turned his attention to a clock on the mantelpiece. Adele told the MIB that the clock was her father’s retirement present, at which he seemed baffled. “Is it your father’s time?” he asked, “Is it here and now?” Then the MIB seemed to freak out like a malfunctioning robot.

He began repeating “your father – his time” over and over and became stiff and immobile. Turning to the door he had to use his hands to move one of his legs. He told Adele to “watch the lights” before leaving in a hurry, disappearing down the street impossibly quickly.

What did he mean when he said ‘watch the lights?’ – Adele would soon find out. Shortly after the MIB left, Adele’s living room filled with small bright lights, which danced around before exiting through the window.

Was this a robotic MIB agent, built by aliens and sent to add a little magic to the sleepy Yorkshire town? Or was it just a sweaty creeper with alopecia and a laser pen? – Source: Weird Worm;

6). In 1971, UFO author Timothy Green Beckley published a pamphlet entitled MIB – Aliens Among us, in which he revealed a US Air Force memorandum apparently written by one Lt Gen Wheless.

It warned military personnel to be on the alert for people impersonating air force officers, describing a person in a USAF uniform who “approached local police and other citizens who had sighted a UFO”.

Apparently, this shadowy figure assembled them and told them that they had not seen what they thought they had seen. Nor should they talk to anyone about their imagined sighting.

As would be expected, sightings of The Men In Black were documented throughout the Sixties and Seventies when the fashionable nihilism spawned by the Vietnam war, nuclear threat and the arms race gradually mutated into academic orthodoxy.

In an atmosphere dominated by Cold War paranoia, assassinations and Watergate, every conspiracy theory gained validity.

7). In 1985, a report emerged from Venezuela in which two doctors claimed that they had seen two men wearing black suits and shades emerge from a magenta Ford Mustang and then climb up a ladder into a UFO.

8). Nine years later (1994), Mike Lonzo, a researcher n Pennsylvania, visited an old woman who told him that she had been approached by two individuals wearing black dinner jackets. They demanded she give them a black stone that was in her back Fyard because it had the power to destroy the world. She complied. Then they asked her out to dinner in a restaurant in Pittsburgh.

The original source of this video is from the “Aerial Phenomenon” Investigations Team in MD. For complete details about this incident contact Antonio Paris from API. Quote from video source:

“I work with the Aerial Phenomenon Investigations Team based in MD. One recent UFO investigation yielded actual footage of MIB on a hotel lobby camera. This video has a voice over of the person these MIB came for”. – M. Barnharrt

See also: Boriska, A Boy From Mars Says That ALL Humans Live Eternally And “People Like Us Still Live On Mars”