Europe is turning into a desert, Pakistan and South India have been abandoned. Polynesia is sunk beneath the waves… This is the world, 4°C warmer than it is now.

But all is not bad: Western Antarctica is blossoming and smart cities thrive in newly green and pleasant lands. Northern Canada, Scandinavia and Siberia produce plentiful harvests to feed the hundreds of millions of climate refugees who now call those regions home.

The map you’re about to see bellow, shows some of the effect a 4°C rise could impact the entire globe. The map is 8 years old, and it seems to get more contemporary as it ages and the planet warms.  This map has turned the continent’s western end incongruously green. And reports start to confirm that Antarctica is indeed turning green.

Serious scientists have no doubt that climate change is real (man made or not). But many people still have a hard time to confront the fact that global warming has destructive impact on the entire earth.

The map portrays an alternative: misery and disaster, but also plenty of hope and solutions. Not solutions that will lead us back to the way climate of a few decades ago (costly and pointless) but solutions that work for the world as it will be, when it will be much warmer than it is now.

Bad news first: Brown means ‘Uninhabitable due to floods, drought or extreme weather’. Say goodbye the Eastern Seaboard of the U.S. , to Mexico and Central America, to the middle third of South America. In Africa, Mozambique and Madagascar are gone; Asia loses much of the Indian subcontinent, including all of Pakistan; Indochina is abandoned, as is most of Indonesia. As the map mentions, “The last inhabitants of (the South-west U.S. are) migrating north. The Colorado river is a mere trickle”; “Deglaciation means (Peru) is dry and uninhabitable”; and “Bangladesh is largely abandoned, as is South India. (In) Pakistan, isolated communities remain in pockets”.

Orange is not in our favor: ‘Uninhabitable desert’. That’s most of the U.S. and the rest of South America (as you can see bellow), almost the entirety of Africa and the southern halves of Europe and Asia. “Deserts have encroached on (Southern Europe), rivers have dried up and the Alps are now snow-free. Goats and other hardy animals are kept at the fringes”, the map predicts.

Red is for lands lost to the rising tide (assuming +4°C adds two metres to ocean levels). This may not seem a lot but this is where populations are concentrated. For example, In the U.S., counties directly on the shoreline constitute less than 10% of the total land area (not including Alaska), but account for 40% of the total population. 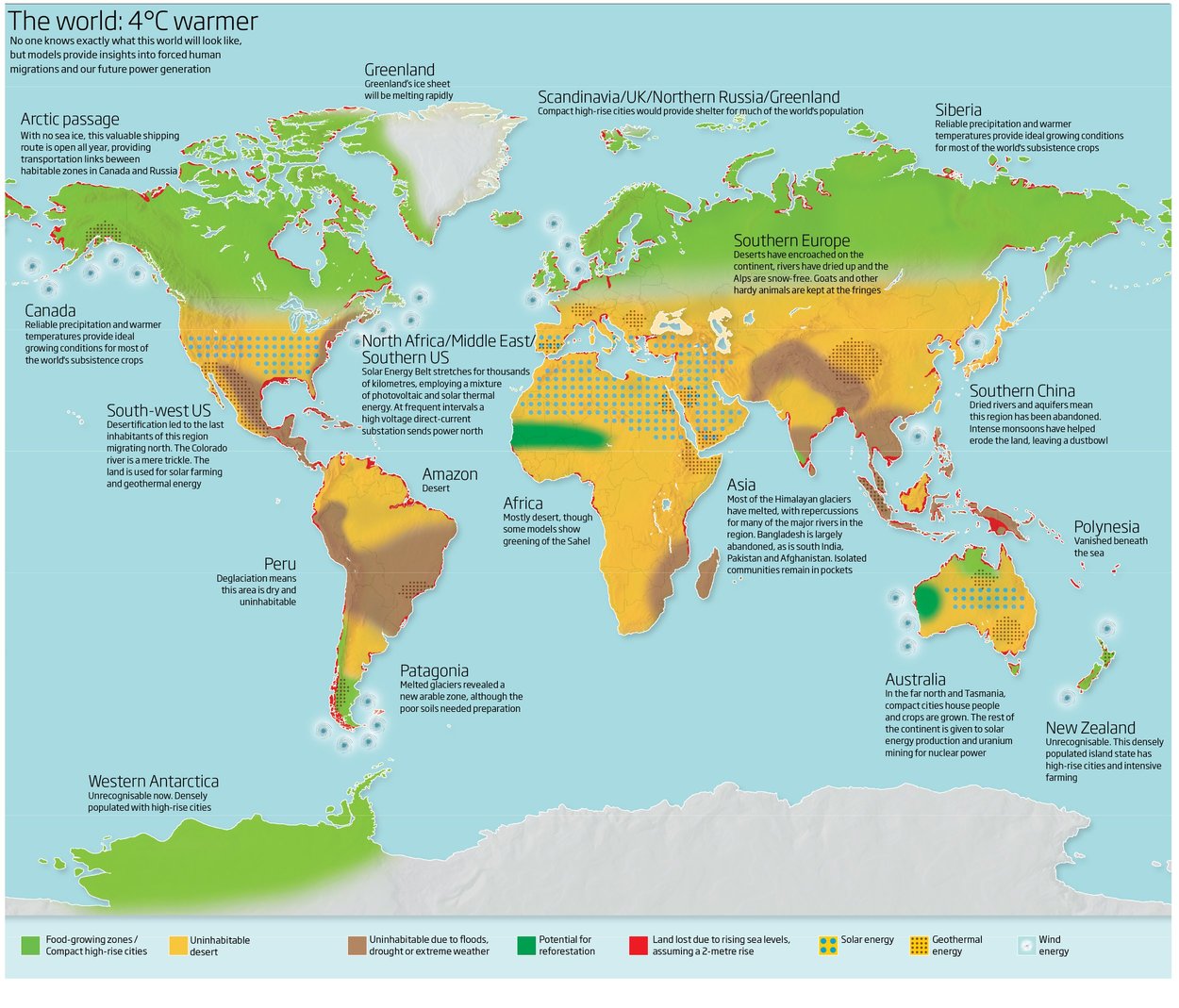 Now the good news. Light-green stands for food-growing zones, and compact high-rise cities. One example is Western Antarctica, “unrecognizable now. Densely populated with high-rise cities”. New Zealand will also be transformed into a high-density population center. There will be a lot more room for this in the northern hemisphere: Siberia and Canada, where “reliable precipitation and warmer temperatures provide ideal growing conditions for most of the world’s subsistence crops.” And the UK, Scandinavia, Greenland and northern Russia, which will be dotted with compact high-rise cities to “provide shelter for much of the world’s population”.

A warmer climate could even lead to reforestation in certain areas of the world, including the Sahel and Western Australia. The regions abandoned to desertification are empty, but not useless: they will be used for solar farming (green dots) and geothermal energy (red dots). Giant wind farms off the  coasts of South America, Alaska and in the North Sea will generate the remainder of the planet’s energy needs.

See After: Earth, Then And Now: Shocking Changes In Our Planet Revealed By Incredible NASA Images

This map was first published by New Scientist, and republished by Parag Khanna for his book Connectography.

Khanna speculates: “The entire population of the Arctic region today is less than 4 million. Could it be 400 million within the coming 20 years?”

Now is the time to buy property in Greenland – before it too turns green!

Map can be found here at Parag Khanna.