Pick a card first and proceed: 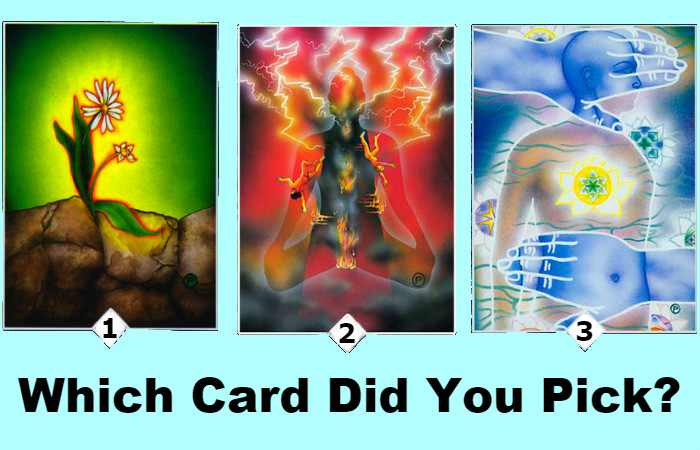 This card depicts a small wildflower that has grown through rocks and stones to reach the sunlight. Surrounded by golden light, it depicts the unabashed beauty of its tiny existence. Whenever a situation gets difficult, we can either be resentful about it and blame others for the hardships we have to face, or we can accept that life is difficult and face the challenges head-on.

The flower essentially symbolizes how to reach the sunlight one has to allow the passion for life to lead us out of the dark. Denying the challenges in life is equal to never taking a risk, and never growing up.
The only way a seed can become a flower is by passing through all the difficulties.

Yet, sure the place is scary, but not going there would be more terrifying. The journey from seed to flower is not difficult. The journey is long, and it is always safer not to go on that journey.

But the seed decided to try and make an effort. And when it does make that effort, it lowers its barriers and starts moving. The struggle is long. The seed fights the soil, the stones and creeps up among the rocks. The seed had the comfort of its shell, the sprout is vulnerable and the world is harsh. The seed could have survived unhurt for many millennia, but the sprout is taking a risk as it moves towards the sun. We are all safer at home. Undertaking a journey is full of dangers, yet the courage is incurable once we are possessed by a dream.

You will also like: Here’s What The Tarot Card Reveals For You Based On Your Zodiac Sign

It essentially means you might be feeling shaken, as if the ground is moving under your feet. If one’s sense of security is challenged, naturally their tendency is to hold onto whatever they can. At the same time, this inner earthquake is tremendously important, for from the wreckage a stronger and braver person will emerge. The fire replenishes the earth, and the dust settles after the storm. If you are facing this destruction, try to detach yourself from the experience, accept it and meet it half way and it will help you reconcile with it.

While meditation helps one realize something slowly, there is another way of reaching enlightenment. Ma Tzu, using his creative genius, came up with this concept. If a student asks a question, the master jumps, shouts or hits him. It looks like an absurd act.

Once Ma Tzu threw a man from the window and jumped onto his chest. The man had only asked Ma Tzu what he should meditate on. Ma Tzu, sitting on the injured man’s chest asked him ‘Did you get it?’ and the poor fellow said ‘yes’ because he was afraid if he said no that he would be beaten again. And as he lay there with his body fractured, and Ma Tzu sitting on his chest and he was asked if he ‘got it’, he realized he really had gotten it. He realized that it was so sudden and out of the blue, that he could never have conceived it.

It is a time when the deeply buried wounds of the past are coming to the surface, ready and available to be healed. You are in a mental state where deeply buried wounds of the past slowly are reviving and you have the opportunity to heal yourself again. The figure in the card is naked and vulnerable to love and care. When one is under the healing influence of the King of Water, one is open and exposed. This allows us to heal, be accepted and feel healthy and whole.

You carry your own wounds inside of you. No one is positively waiting to hurt you; everyone is busy carrying their own wounds. Still, when one is so ready to be wounded, one often gets hurt. But a man of Tao cannot be hurt because he cannot be touched. Someone who is whole, healthy and healed cannot be hurt.

Be aware of your wound, instead of letting it grow, let it be healed. Only by moving to the roots can one fix the problems. Instead of focusing on the head, focus on your entire being and be accepting. For 24 hours, try to accept everything. If someone insults you, walk away and see what happens. A strange amount of energy will flow into you, a sense of freedom that will help you be healed and heal others.